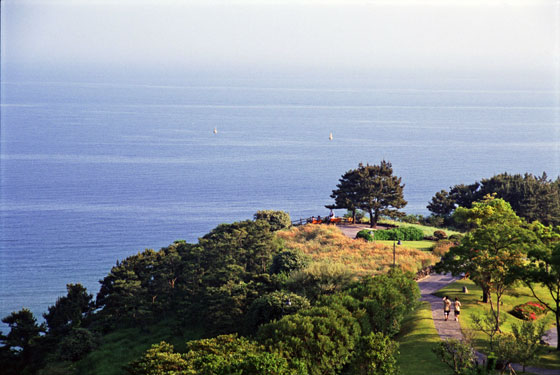 View of the sea from Cheju Island (Daisaku Ikeda, May 1999)

The Changwon Exhibition Convention Center in South Gyeongsang, South Korea, hosted "Dialogue with Nature," an exhibition of nature and scenic photographs taken by Daisaku Ikeda in Japan and during his travels abroad. The exhibition, which took place from October 15-20, 2015, and received 15,000 visitors, was sponsored by SGI-Korea and the JoongAng Media Network and supported by the Ministry of Culture and Tourism, the Ministry of Environment, the Federation of Artistic Cultural Organizations of Korea (FACOK), and others. Among the attendees at the opening were Changwon Mayor Ahn Sang-soo, FACOK Chair Ha Chul-Kyung and Kyungnam University President Park Jae-kyu.

The "Dialogue with Nature" exhibition has been shown at over 1,000 venues around the world since its launch in 1982, supporting Mr. Ikeda's aim of cultivating cultural exchange with other nations. The exhibition, seen by some 700,000 in South Korea, has been hosted by 11 cities including Seoul, Pusan, Gwanju and Daegu.

Mr. Ikeda is an avid amateur photographer with an uncanny ability to discover beauty and uniqueness in ordinary scenes. He began taking photographs in the 1970s while recuperating from illness, after a friend presented him with a camera and suggested that he take it up as a hobby. Mr. Ikeda is an honorary member of France's Val de Bievres Photo Club, an overseas member of the Wiener Künstlerhaus (Austrian Artists Association), and an honorary life member of the Singapore Photographic Society.

[Adapted from an article in the October 22, 2015, issue of the Seikyo Shimbun, Soka Gakkai, Japan]