Kyungnam University (KU), the Republic of Korea, presented SGI President and Soka University founder Daisaku Ikeda with the degree of Doctor of Philosophy in Education, honoris causa, at a ceremony held in conjunction with an alumni gathering on the Soka University campus in Tokyo on September 20, 2015. Mr. Ikeda was recognized for his contributions to the promotion of peace and culture and his unwavering commitment to fostering humanistic leaders. In attendance were KU President Park Jae Kyu; his wife, Kim Sun Hyang, who serves as board of trustees chair of the University of North Korean Studies; KU Vice President for Public Relations Lee Jong Boong; KU Graduate School Dean Song Byung Joo; KU College of Education Dean Choe HoSeong; and KU Office of External Affairs Dean Park Jeong Jin. Soka University Board of Trustees member Hiromasa Ikeda accepted the award on behalf of his father.

Kyungnam University, located in Changwon, South Korea, is a private university established in 1945. With a student body of 130,000, the university is known for its peace studies and initiatives promoting the unification of the divided Korean peninsula. It has also been recognized as one of the 10 most beautiful universities in the country for its scenic landscape. With the motto of "truth, freedom, and creation" as its guidepost, the university's goal is to produce well-educated professionals, community leaders and genuine world citizens.

In his conferral speech, President Park commented on how honored they were to award Mr. Ikeda and welcome him to the KU community, commending the Soka University founder in four areas: 1) His dedication to fostering leaders of character and creativity through various educational institutions he has founded; 2) his contributions to maintaining world peace and promoting culture through establishing peace and cultural institutions; 3) for inspiring people the world over through his numerous writings including his poetry and dialogues with distinguished leaders; and 4) for his continuous efforts to establish harmony in Korea and creating lasting value for the future of Japanese-Korean relations.

In an acceptance message read by proxy, Mr. Ikeda expressed his deep appreciation for the honor and for being able to share this occasion with the Soka alumni. Referring to the Korean university's symbol of a warhorse of ancient Chinese legend renowned for its enduring strength and tireless vigor, Mr. Ikeda quoted President Park's portrayal of the stallion as symbolizing the university's spiritual legacy of indomitable will and unwavering hope toward fulfilling one's mission in life. The Soka founder urged the alumni to summon this quintessential life force, which corresponds to the never-defeated spirit of Soka education, and forge ahead with vibrant resolve in the face of daunting adversity. 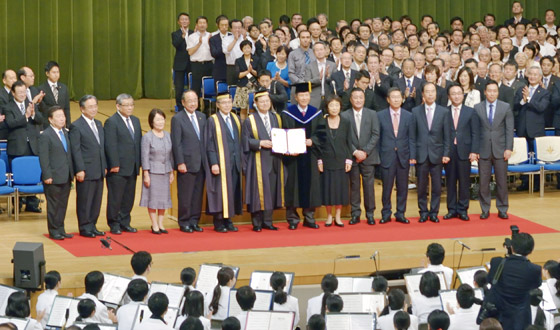 [Adapted from an article in the September 21, 2015, issue of the Seikyo Shimbun, Soka Gakkai, Japan]