The National University of Tucumán (UNT), Argentine Republic, presented an honorary doctorate to SGI President Daisaku Ikeda for his long-standing commitment to the development of education, peace and human rights. The decision to confer the award upon Mr. Ikeda was unanimously approved the previous year by the board of trustees comprising 31 members including 13 faculty deans, 9 professors, 6 students, 2 alumni and 1 staff.

Located in the capital of Tucumán Province in San Miguel de Tucumán, UNT was founded on May 25, 1914, around a century after the declaration of independence. While Tucumán Province prospered as the hub of economy and culture in the northern region, more and more citizens sought educational opportunities. Scholars such as Dr. Juan B. Terán rose to the challenge and founded the university. As UNT’s first rector, Dr. Terán instituted a personal motto from his youth as the university motto: “Feet on the ground, eyes on the sky.” This signifies the university’s desire to teach students to integrate the knowledge and skills acquired at university with the needs of society so they can contribute to developing realistic solutions to global issues. The university currently has 13 faculties with an enrollment of approximately 65,000 students.

In a citation, Rector Bardón lauded Mr. Ikeda for his untiring dedication, stating that his actions, driven by his educational mission, are based on humanistic values and a desire to promote cross-cultural understanding as well as creating solidarity grounded in the pursuit of peace and the betterment of humankind.

In an acceptance message read by proxy, Mr. Ikeda commended UNT for paving the future as a driving force for the nation’s development over the years as one of the most prestigious universities on the South American continent. Mr. Ikeda remarked that Dr. Terán, who taught his students the importance of dedicating one’s life for the sake of others saying, “Living your life for others will in turn enrich your own life,” shares similar values as the founder of Soka education, Tsunesaburo Makiguchi, who also aspired to foster global citizens who endeavor to create happiness for oneself and others. Mr. Makiguchi believed that humanity must strive for a society based on humanistic competition and not one driven by military, political or economic gain. Mr. Ikeda concluded his message by expressing his deep appreciation for the honor of being welcomed as a member of UNT, promising to continue working together with the university community to expand human solidarity in the wake of divisions that thwart mutual understanding and harmonious coexistence. 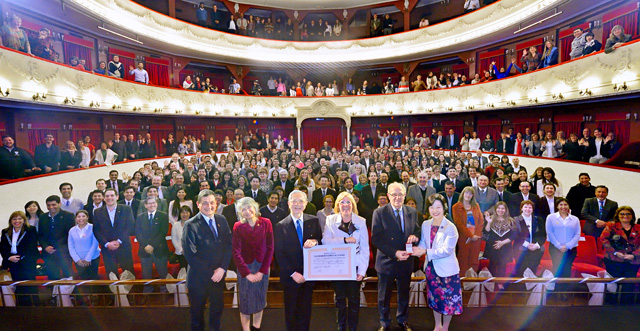 [Adapted from an article in the August 26, 2016, issue of the Seikyo Shimbun, Soka Gakkai, Japan]