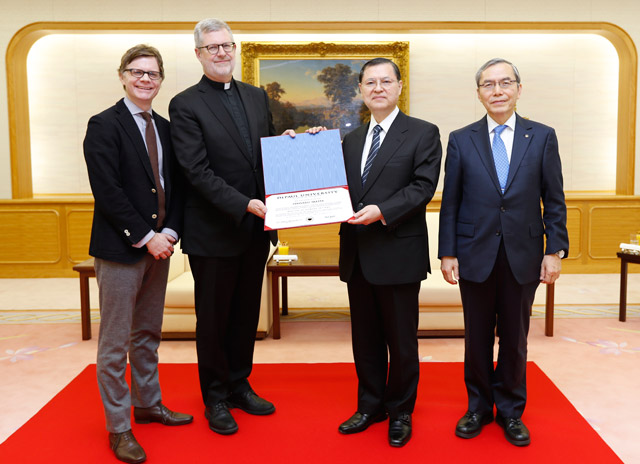 On December 28, 2016, De Paul University in Chicago, Illinois, conferred an Honorary Doctorate of Humane Letters upon Soka University founder Daisaku Ikeda in a ceremony by proxy at the Soka Gakkai Headquarters in Shinanomachi, Tokyo. Mr. Ikeda was recognized for his lifetime dedication to the cause of peace and advocating for education and the eradication of fundamental causes of conflict. The Reverend Dennis H. Holtschneider, C.M., DePaul University President, entrusted the degree certificate to Mr. Ikeda’s son, Hiromasa Ikeda, executive advisor to Soka University Japan. Also attending the conferral were DePaul University Associate Professor and Director of the Institute for Daisaku Ikeda Studies in Education Jason Goulah and Soka University Japan President Yoshihisa Baba.

Dr. Holtschneider remarked that he had traveled to Japan to offer his deep respect for Mr. Ikeda’s lifework and show his appreciation for the mission of Soka University. He then called for the two institutions to come together “to further strengthen our efforts to work for the betterment of humanity.”

In an acceptance message, Mr. Ikeda commended DePaul University’s legacy of providing people from less privileged backgrounds the opportunity to receive an education and said Mr. Makiguchi would have welcomed the deepening of exchange with DePaul University, an exalted institution of such honorable tradition. He also referred to and concurred with the “Copernican revolution” that John Dewey called for in the philosophy of education, where the child would become the “sun” around which educational practices revolve and are organized. With global society mired in political, economic and even religious upheaval, Mr. Ikeda said he was convinced "nothing less than such a Copernican revolution is now demanded of humankind . . . in which we make learning and education the central concerns of the twenty-first century."

Founded by the Vincentians in 1898, DePaul University was named after the 17th-century French Roman Catholic priest Saint Vincent de Paul (1581–1660) who dedicated himself to serving the poor. The university, the largest Catholic university in the US, enrolls around 16,000 undergraduate and about 7,600 graduate/law students. The students, representing over 60 countries, come from diverse religious, ethnic, and geographic backgrounds. DePaul places special emphasis on recruiting students from disadvantaged backgrounds.

In April 2014, DePaul University established the Institute for Daisaku Ikeda Studies in Education to research the philosophy and practice of Soka ("value-creating") education, first formulated by Japanese educator Tsunesaburo Makiguchi (1887–1944) and his protégé Josei Toda (1900–1958) and given concrete expression by Mr. Ikeda through his establishment of the Soka school system. A new master’s degree program in Value-Creating Education for Global Citizenship is currently being developed by DePaul University’s College of Education, focusing on the educational philosophies and practices of Mr. Ikeda and the Soka heritage. The curriculum will be delivered in both face-to-face and online strands, making it available for students worldwide.