Dialogue and Empathy Keys to Breaking Cycles of Violence and Hatred 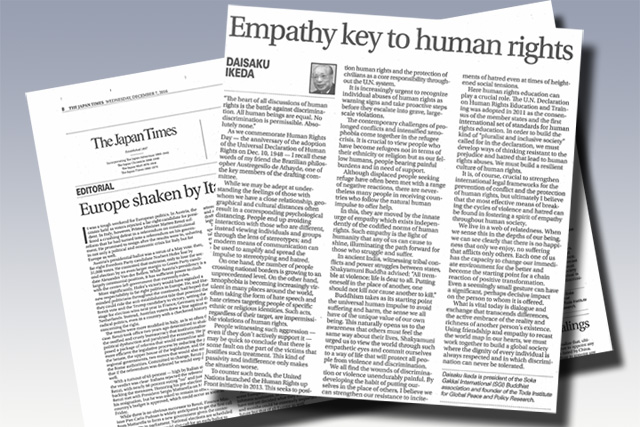 As global society finds itself mired in political, economic, ethnic and even religious upheaval, "it is increasingly urgent to recognize individual abuses of human rights as warning signs and take proactive steps before they escalate into grave, large-scale violations," writes SGI President Daisaku Ikeda in a commentary contributed to The Japan Times in commemoration of Human Rights Day—the anniversary of the UN’s Universal Declaration of Human Rights on December 10, 1948. People tend to avoid interaction with those who are different, and modern means of communication at times can be used to amplify and spread stereotyping and hatred, leading to hate speech and hate crimes. Passivity or indifference of witnesses to such aggression can aggravate the situation, he says.

To counter such trends, writes Mr. Ikeda, the United Nations has made human rights education and protection of civilians its core responsibility through initiatives such as Human Rights Up Front of 2013 and Declaration on Human Rights Education and Training of 2011. Explaining that we are all interconnected, he encourages people to get in touch with their humanity and compassion and fostering a spirit of dialogue and empathy in order to break the cycles of violence and hatred.

This is one of the focal points of Mr. Ikeda’s 2017 Peace Proposal issued on January 26, in which he stresses the power of youth in building a global solidarity. [Link to January 26, 2017, article introducing the proposal]

[Reported in the December 10, 2016, issue of the Seikyo Shimbun, Soka Gakkai, Japan]