SGI President One of Four Poets of Peace Honored in Dubai 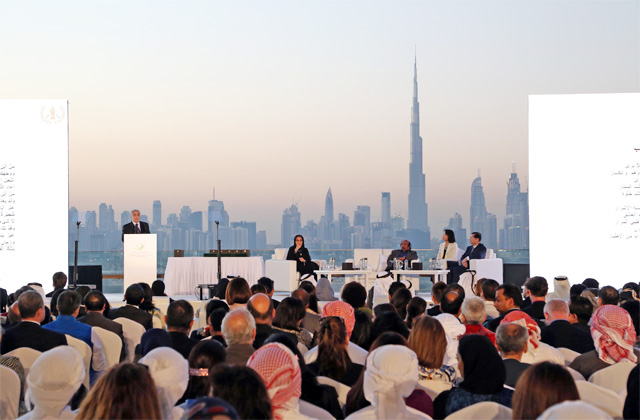 SGI President Daisaku Ikeda was among four poets honored with the International Poets of Peace award in Dubai on February 22, 2016. The accolade is part of the Mohammad Bin Rashid World Peace Award, an initiative launched by His Highness Emir Mohammad Bin Rashid Al Maktoum, vice president and prime minister of the United Arab Emirates. The other three poets were: Egyptian journalist and poet Farouq Gouida, a prominent figure in Arab literature; UAE poet Kholoud Al Mulla, a young poet whose works have been translated into many languages; and contemporary Indian poet K. Satchidanandan, whose works have also been translated into 19 languages. The recipients of the award were acknowledged for their contributions through their poetry to promoting a culture of peace and dialogue and uniting people in solidarity—transcending culture, ethnicity and religion—against extremist and radical ideologies. Mr. Ikeda’s son, Hiromasa Ikeda, traveled to Dubai for the ceremony and received the award on his father’s behalf.

The conferral coincided with the first International Day for Poets of Peace, attended by 500 people. His Excellency Sheikh Nahyan bin Mubarak Al Nahyan, UAE’s minister of culture and knowledge development, presented the awards. “We reinforce the idea that poetry, and literature in general, are a universal language that plays an important role in spreading the message of peace in the world,” Sheikh Nahyan said, adding that “poetry had and continues to have an important place in Arabic culture by helping to preserve and spread its history.”

In an acceptance message read by his son, Mr. Ikeda referred to Dubai as the capital of global citizens, and he expressed his hopes for the city to become a star of peace, brimming with life, beauty and brightness on earth.

Having experienced firsthand the horrors of war as a youth, Mr. Ikeda said “it was poetry and the poetic spirit that I took comfort in and found the support that enabled me to discover hope for the future.” Since then, his passion for poetry has led him to composing more than 140,000 poetic works. He expressed his hope that “humankind—forging ever broader, deeper, stronger bonds—may together give voice in poetry to our sense of wonder and praise for life, our shared outrage at and rejection of violence, and our proud celebration of what it means to be human.”