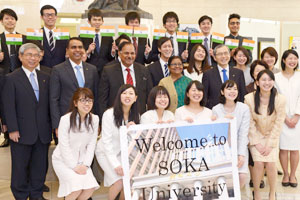 Barkatullah University Bhopal (BU) in India presented the degree of Doctor of Letters, honoris causa, to SGI President and Soka University founder Daisaku Ikeda. He was recognized for his grassroots efforts to build a culture of peace through humanistic education and for his untiring pursuit of humanity's happiness. Vice Chancellor Murli Dhar Tiwari entrusted the certificate to Soka University President Yoshihisa Baba, who accepted it on Mr. Ikeda's behalf, at a ceremony held by proxy on the Soka University university campus in Tokyo on January 22, 2016.

Barkatullah University, formerly known as Bhopal University, was established in 1970 in the capital city of Madhya Pradesh. In 1988, it was renamed Barkatullah Vishwavidyalaya, in tribute to Professor Barkatullah, the great freedom fighter from Bhopal. Some 160,000 students study in the more than six hundred colleges affiliated with the university. BU's commitment to academic excellence is highlighted in the university's vision: "Our future depends not on what will happen to us, but on what we decide to become and on the will to create it."

In a citation, Vice Chancellor Tiwari stated, "As an advocate of peace, Mr. Ikeda has emphasized the expansion of friendship through dialogue across differences in order to build a world of coexistence. A central theme in Mr. Ikeda's philosophy is that 'human revolution'--inner-motivated change--within even a single individual can positively influence all humankind. We feel proud to have Mr. Ikeda as a distinguished alumnus of our university and hope to get your guidance in shaping the future of our students."

In a message read by proxy, Mr. Ikeda expressed his appreciation for the honor calling BU a great citadel of education that fosters the youth of India, true to the legacy of its namesake, Professor Barkatullah, a philosopher who waged a struggle with words. Citing the American inventor Thomas Edison's words, "Our greatest weakness lies in giving up. The most certain way to succeed is always to try just one more time," Mr. Ikeda expressed his resolve to continue to strive dauntlessly to open a path of education for humanity that will illuminate the future with hope.

[Adapted from an article in the January 23, 2016, issue of the Seikyo Shimbun, Soka Gakkai, Japan]