On March 12, 2016, Uzgen Institute of Technology and Education in the Kyrgyz Republic conferred its first honorary doctorate upon Soka University founder and SGI President Daisaku Ikeda at a ceremony by proxy, held on the Soka University campus in Hachioji, Tokyo. Director Asanbek Akmataliev entrusted the certificate to Soka University President Yoshihisa Baba who accepted it on Mr. Ikeda's behalf. Also in attendance were Board Chair of the People's Assembly of Kyrgyzstan Bektemir Murzubraimov; Professor Hironori Ito, advisor to the rector of Bishkek Humanities University; Soka University Board of Trustees Chair Yasunori Tashiro; Soka Women's College President Keiko Ishikawa; and representatives of the Soka student body.

Uzgen Institute of Technology and Education, located in the Osh region on the eastern end of Kyrgyzstan, opened in 1995 as an extension campus of Osh Technological University and was renamed in 2002. Over 1,500 students in two faculties pursue studies in fields such as economics, pedagogics, and natural sciences.

In a citation, Mr. Ikeda was recognized for his efforts to develop lasting humanistic values for the sake of global peace and security. Director Akmataliev expressed his joy and honor in presenting this award to Mr. Ikeda, who exemplifies how to behave with genuine humanity for living harmoniously in global society in an age teeming with turmoil.

In a message, Mr. Ikeda expressed his appreciation for the honor and vowed to work together with the youth who shoulder the future to further pave the way along the "Silk Road" of peace and friendship for uniting humankind. Quoting from "The Wisdom which Brings Happiness," the work of Yusuf Khass Hajib (also known as Yusuf Balasaguni), an 11th century poet from the ancient city of Balasagun in Kyrgyzstan, Mr. Ikeda concurred that actions grounded in wisdom brings about justice and even happiness. In our present violence-ridden age that impairs our existence, he remarked, the act of learning itself is the challenge to believe, protect and respect the life of oneself and all humanity. 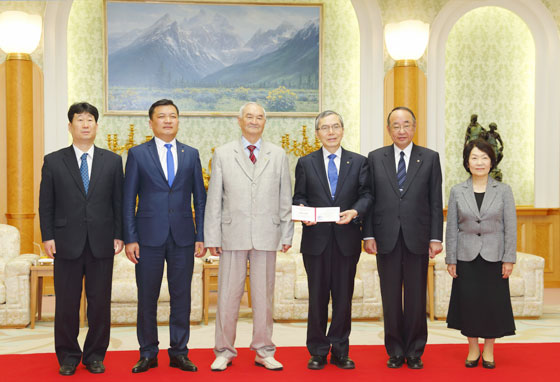 [Adapted from an article in the March 13, 2016, issue of the Seikyo Shimbun, Soka Gakkai, Japan]