SGI President Daisaku Ikeda was a recipient of the 2016 Gusi Peace Prize from the Philippine foundation of the same name. He was recognized for his longstanding contributions to peacebuilding through education and the philosophy of Buddhist humanism. SGI Vice President Hiromasa Ikeda accepted the award on his father’s behalf from Foundation Chair Barry Gusi at a conferral held at the Philippine International Convention Center in Manila on November 23, 2016. Among the 14 award recipients for 2016 also include Prime Minister Timothy Harris of Saint Kitts and Nevis, Mr. Amor Masovic, chair of the Bosnian Federal Commission for Missing Persons, and Mr. Nicolas Hagger, British poet, writer and cultural historian.

Based in the Republic of the Philippines, the Gusi Peace Prize Foundation aims to recognize individuals or groups throughout the world that have distinguished themselves as exceptional role models for society or have contributed toward advancing peace and respect for the dignity of human life. In so doing, the foundation has inspired and raised awareness among people in society. Past recipients include former Philippine president Fidel V. Ramos (2006) and former Kyrgyzstan president Askar Akayev (2015). The Gusi Peace Prize is also a charitable foundation working in partnership with nongovernmental organizations for the betterment of humanity through medical missions, outreach programs and counseling for the underprivileged, abused and the sick. The foundation’s roots date back 70 years to chairman Gusi’s father, Captain Gemeniano Javier Gusi (1920–88), who fought against Japanese oppression during World War II and later became an advocate for human rights, supported by his wife, Teodora Sotejo Gusi (1934–2005).

Chairman Gusi reflects, “My father used to say, ‘You should never condemn or fault others. Instead, you must advance for the sake of world peace and harmony, today and tomorrow.’” He explains that he, too, has worked hard to cultivate friendships throughout the world and that is why the foundation wanted to commend Mr. Ikeda for his achievements as a great leader who has built a network connecting people across the globe.

In an acceptance message read by proxy, Mr. Ikeda expressed his deep appreciation for the accolade, saying, “No acknowledgement of my work is as dear to me as that which has been conferred by an institution championing peace and humanity.” Expressing his wish to share this award with his fellow SGI members around the world, Mr. Ikeda stated:

I am told that gusi in Tagalog means “antique jar of treasures.” Chairman Gusi points out that “peace should start from within,” and this, I believe, signifies that the veritable “pot of gold” truly does dwell in our hearts. The reason why SGI members everywhere engage in a grassroots dialogue as a means to inspire others lies in our belief in the virtuous nature of every individual, the “treasure of life.”

In closing, he firmly pledged “to play my part in expanding even further the ranks of our great march for peace and humanity,” along with fellow award recipients. 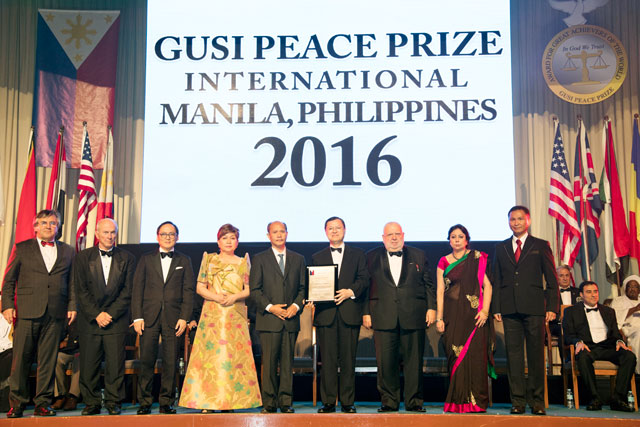 [Adapted from an article in the November 26, 2016, issue of the Seikyo Shimbun, Soka Gakkai, Japan]