Commemorating the 45th Anniversary of the Normalization of China–Japan Relations

The Peking Opera Company performs "The Lucky Charm" at the Chiba Prefectural Cultural Hall in Chiba prefecture on March 10, 2017

This year marks the 45th anniversary of the normalization of diplomatic ties between China and Japan. Events celebrating the occasion were organized by the Min-On Concert Association and Soka University, cultural and educational institutions founded by SGI President Daisaku Ikeda.

From March 29 to April 28, 2017, Min-On hosted the world-renowned China National Peking Opera Company to perform in 29 cities across Japan. Chinese Ambassador to Japan Cheng Yonghua and other ambassadors and staff from 34 countries attended the company’s Tokyo performance on April 12.

On that occasion, Soka Gakkai President Minoru Harada exchanged greetings with Ambassador Cheng, in which they commented on the flow of cultural exchange between China and Japan that originated from Mr. Ikeda’s encounter with Chinese Premier Zhou Enlai in 1974 and their strong commitment to improved Sino-Japanese relations. Ambassador Cheng commented: “Exchanges between our countries’ people and cultures, which form the foundation of Sino–Japanese friendship, are rock solid, and Min-On has played a crucial role as a bridge facilitating such exchanges.” 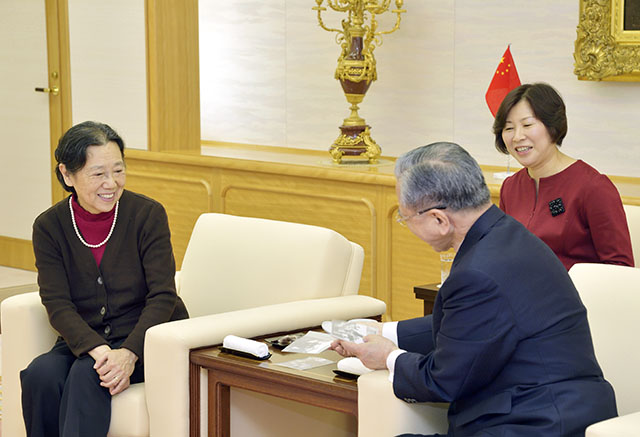 Established in 1955 with the support of Premier Zhou, the China National Peking Opera Company is directly under the supervision of the Ministry of Culture of the People’s Republic of China. Since its founding, the company has played a crucial role in cultural exchange, sending Peking Opera artists across the world to spread trust and understanding of China through the arts. In 1975, the year after Mr. Ikeda met with Premier Zhou, Min-On invited a Chinese traditional dance group to perform in Japan, the first of some 2,000 shows by more than 40 Chinese cultural groups.

On April 9, Soka University hosted a cherry blossom viewing at the cherry tree planted on the campus in honor of Premier Zhou in 1975. Guests who participated in the viewing included: Zhou Enlai’s niece Zhou Bingyi and other family members, Minister Liu Shaobin and other representatives from the Chinese embassy in Japan, a delegation of visiting scholars from research centers established at various universities in China to study Daisaku Ikeda's ideas and philosophy and a number of Chinese students also engaged in this field.

In December 1974, when Mr. Ikeda met with Premier Zhou in Beijing, the premier shared memories of having studied in Japan 50 years prior and of the breathtaking sight of the cherry blossoms in the spring. Mr. Ikeda responded, “Please come to visit Japan again when the cherry trees are in bloom.” Premier Zhou, who was gravely ill at the time, responded, “I would like that very much, but it is likely impossible. My body no longer obeys my wishes.”

The following April, although the premier was unable to visit Japan, Mr. Ikeda proposed that a cherry tree be planted in his honor at Soka University, infused with a pledge for China–Japan friendship, together with a cherry tree for each of the six Soka University-sponsored Chinese exchange students, the first to study in Japan after the normalization of diplomatic relations between the two countries. The current Chinese Ambassador to Japan Cheng Yonghua was one of the six students present at that time.

In her speech at the cherry blossom viewing, Zhou Bingyi stressed that both Premier Zhou and President Ikeda shared the belief that China–Japan friendship is the bedrock of peace and security in Asia and the world. “Let us continue to strive for the peace and friendship of both nations’ peoples, as Premier Zhou so deeply desired.”