On August 21, 2017, the National University of San Marcos (Universidad Nacional Mayor de San Marcos, UNMSM) in Peru conferred an honorary doctorate upon Soka University founder and SGI President Daisaku Ikeda in recognition of his contributions to peace and culture grounded in humanistic ideals. This follows an honorary professorship that was presented in 1981.

Founded in 1551, UNMSM is the oldest officially-established university in the Americas. It currently comprises 62 schools organized into 20 faculties and 6 academic areas, as well as a number of public institutions such as the San Marcos Cultural Center and Museum of Natural History of Lima. UNSM has a faculty of over 2,000, and a student body of over 30,000 undergraduate and 4,000 graduate students. As a leading institution of higher education in Peru, UNMSM counts among its alumni influential Peruvian and Latin American thinkers, researchers, scientists and politicians, including Mario Vargas Llosa, who won the Nobel Prize in Literature in 2010.

The conferral was held on August 21, 2017, at the UNMSM campus in Lima. Rector Orestes Cachay Boza entrusted the degree certificate and a commemorative medal to Soka Gakkai President Minoru Harada and an SGI delegation from Japan, who accepted them on Mr. Ikeda’s behalf. Also in attendance were Professor José Carlons Ballón Vargas, dean of the Faculty of Letters and Human Sciences, former Peruvian Foreign Minister Oscar Maurtua, and members of the university faculty, staff and student body.

When asked about the university’s decision to confer this degree upon Mr. Ikeda, Rector Cachay explained that the university is strengthening its efforts to promote pacifist philosophies, the value of education and the importance of culture. From this perspective, he said, Mr. Ikeda is one who has traveled the world to champion the cause of peace while inspiring and empowering others to take tangible action towards its achievement; therefore, it is an honor to welcome Mr. Ikeda as part of the UNMSM community and learn from his philosophy and actions.

In his acceptance message, Mr. Ikeda expressed his appreciation for the honor, which he dedicated to his mentor, second Soka Gakkai President Josei Toda, whom he met 70 years ago on August 24, 1947, and from whom he received one-on-one lectures and lessons on a wide range of subjects during his youth. Further, he stated that he had received the award on behalf of the SGI members of Peru, who have continued to contribute to their local communities and country as good citizens.

Recalling the warm welcome he received in March 1974 when he first visited UNMSM, Mr. Ikeda shared how moved he was when the rector at the time had expressed his support for Soka University, a fledgling institution founded just three years prior, when compared to the Peruvian university with its longstanding history and tradition. Mr. Ikeda also concurred with UNMSM’s emphasis on creating a culture of dialogue as the key to drawing forth the infinite potential of students, and praised the university for having striven together with the ordinary people to surmount the obstacles that stand in the way of humankind’s peace, happiness and wisdom. 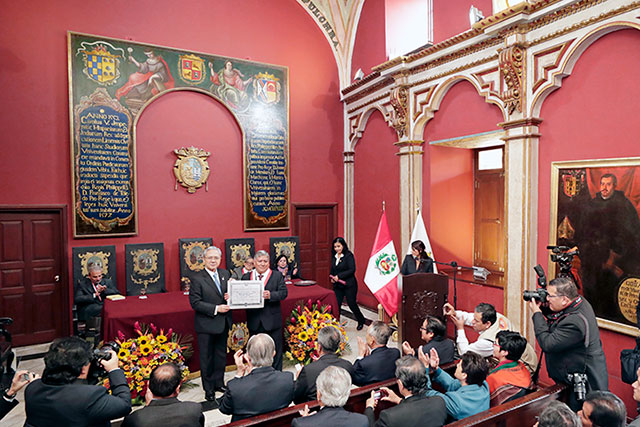 [Adapted from an article in the August 24, 2017, issue of the Seikyo Shimbun, Soka Gakkai, Japan]