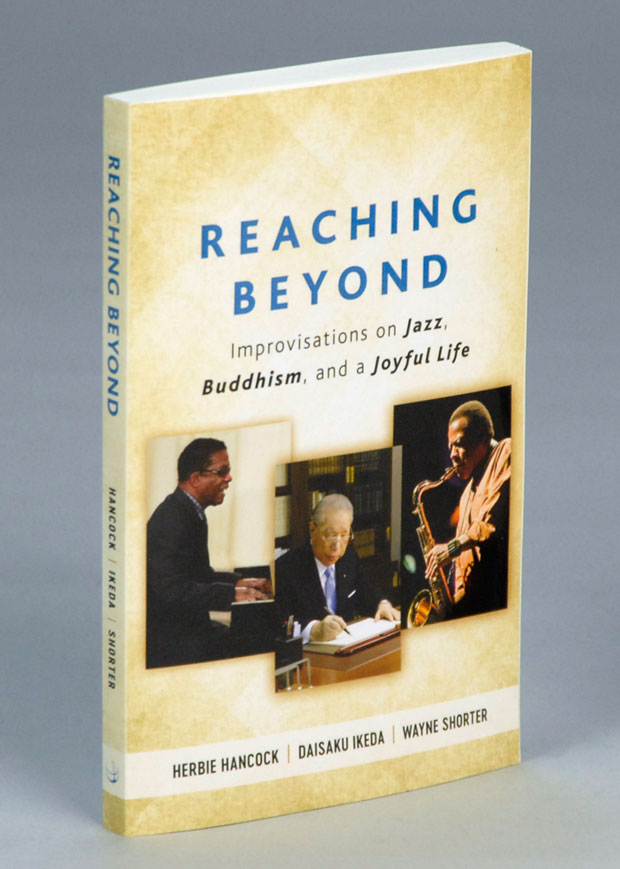 LOS ANGELES, USA: World Tribune Press has released Reaching Beyond: Improvisations on Jazz, Buddhism, and a Joyful Life, a dialogue between SGI President Daisaku Ikeda and two world-renowned jazz musicians, Herbie Hancock and Wayne Shorter. Their discourse was originally serialized in the Seikyo Shimbun, the Soka Gakkai’s organ newspaper, from September 2010 to December 2011, and published as a book in Japanese, titled Jazu to buppo, soshite jinsei o kataru in 2013.

A jazz pianist and composer, Mr. Hancock is a fourteen-time Grammy winner including Best Album in 2008 as the first jazz artist to win in this category in 43 years. Mr. Shorter, a ten-time Grammy-winning tenor saxophonist and composer, continues to lead the jazz fusion genre even today at the age of 83. Messrs. Hancock and Shorter are members of SGI-USA and serve as co-presidents of the International Committee of Artists for Peace based in Los Angeles. They first met Mr. Ikeda in 1974 and their conversations on jazz and Buddhism have continued over many years both in person and through correspondence.

In the course of their discussions, they explore the roots of jazz, its role in the advancement of fostering youth, and its harmonious ties with Buddhist philosophy, while touching on various topics from nuclear disarmament to environmental pollution. When Mr. Ikeda observes that it is now more important than ever to resound the myo-on (wonderful sound) that inspires people to live with powerful optimism, Mr. Shorter responds that music encourages and enables people to squarely face whatever challenges they encounter in life and tackling their own negative tendencies so they are able to advance. Mr. Hancock adds that in order to persevere and triumph in today’s ever-changing, nontransparent world, we need courage like that of the lion king, which, he says, Mr. Ikeda has exemplified throughout his life.

[Adapted from an article in the January 20, 2017, issue of the Seikyo Shimbun, Soka Gakkai, Japan]