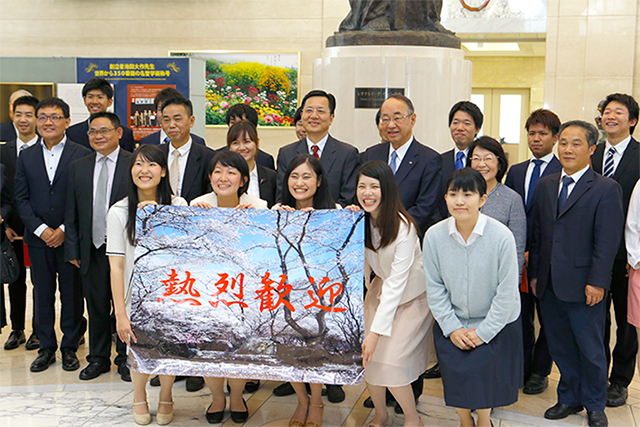 The Hunan University of Technology (HUT) in China conferred an honorary professorship upon SGI President and Soka University founder Daisaku Ikeda for his longstanding contributions to world peace and Sino-Japanese friendship. The university’s Party Committee Secretary Tang Weibing, who traveled to Japan with a delegation from China, entrusted the certificate of appointment to Soka University Board of Trustees Chair Yoshinori Tashiro in a ceremony held at the Soka University campus on June 22, 2017.

Formerly known as the Zhuzhou Institute of Technology, HUT was founded in 1958 in Hengyang, the second largest city in Hunan Province. With the College of Packaging and Material Engineering and the College of Packaging Design and Art among its core programs, the university comprises 24 faculties and a student enrollment of 40,000. In the half century since its establishment, it has developed into a comprehensive university with specialized branches in the sciences, engineering, arts, law and management. HUT engages in international exchange and cooperation with universities worldwide.

In a citation, Mr. Tang remarked that Mr. Ikeda, based on his belief in education as the fundamental component for social change and the realization of peace, has greatly promoted Sino-Japanese friendship and exchanges through education, culture, and the arts. Expressing hopes for the strengthening of exchanges between the two universities, he stated that it was an honor to present Mr. Ikeda with the accolade.

In an acceptance message, Mr. Ikeda expressed his deep appreciation for the honor, which he described as a symbol of human harmony. He lauded HUT’s unceasing efforts toward its development as an institution of higher learning committed to creative scholarship leading to positive social contributions that improve the lives of people in tangible ways, He expressed his hopes for students of both HUT and Soka University to immerse themselves in society and continually strive alongside the people. In this regard, Mr. Ikeda also shared his resolve to support HUT’s mission to send forth global citizens with unwavering principles into society, thereby expanding the solidarity of peace that is vital in this age. 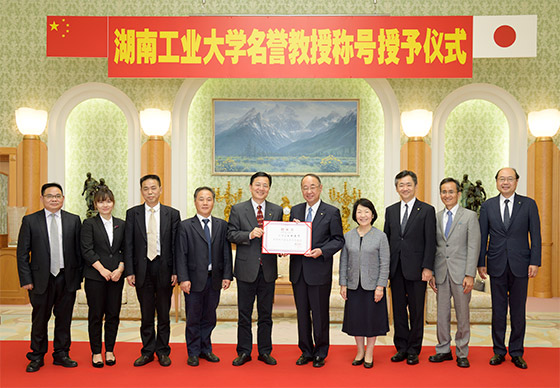