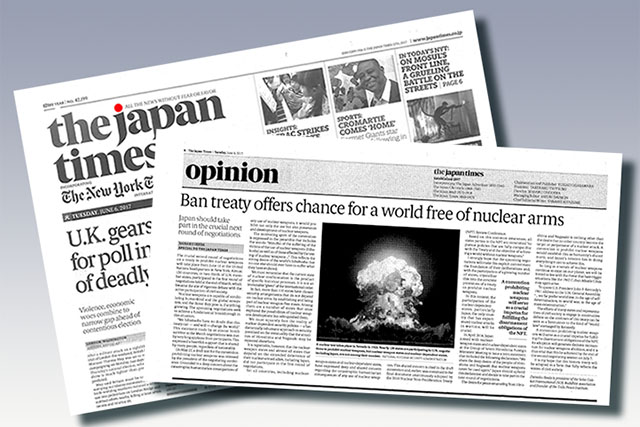 “Nuclear weapons are capable of annihilating humankind and the global ecosystem, and the threat they pose is, if anything, growing. The upcoming negotiations seek to achieve a fundamental breakthrough in this situation,” writes SGI President Daisaku Ikeda in a commentary to The Japan Times ahead of the second round of negotiations on a treaty to prohibit nuclear weapons taking place at the UN Headquarters in New York from June 15, 2017.

“We must remember that the current state of nuclear confrontation is the product of specific historical processes. It is not an immutable ‘given’ of the international order,” he says, urging that adopting the convention prohibiting nuclear weapons—the draft of which was released in May after the first round of vigorous debate by civil society and 130 UN member states—would serve as a crucial impetus for fulfilling the disarmament obligations of the Nuclear Non-proliferation Treaty (NPT) and generate decisive momentum for nuclear weapons abolition. “It is thus vital that this be achieved by the end of the second negotiating session on July 7.”

Ikeda also expressed regret at the absence of nearly all states dependent on the extended deterrence of nuclear-armed allies in the first round of negotiations and says their participation—particularly Japan—in the upcoming sessions would prove crucial.

“The desire for peace emanating from Hiroshima and Nagasaki is nothing other than the desire that no other country become the target or perpetrator of a nuclear attack. A convention to prohibit nuclear weapons would establish this as humanity’s shared norm, and Japan’s mission lies in doing everything it can to achieve this,” he writes.