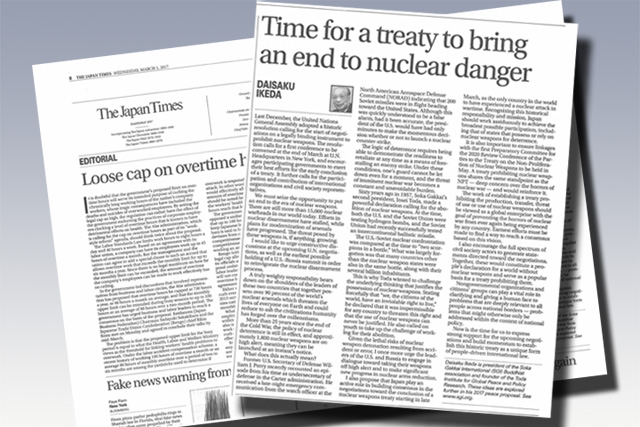 In advance of the historic UN conference to negotiate a nuclear-weapon ban adopted mid-February and which will convene a four-week substantive session beginning March 27, SGI President Daisaku Ikeda contributed an essay to the March 1, 2017, issue of The Japan Times, a major English-language daily published in Japan. In the opinion editorial titled “Time for a Treaty to Bring and End to Nuclear Danger,” Mr. Ikeda proposes an early summit between the U.S. and Russia—“two countries that together possess over 90 percent of the world’s nuclear arsenals which threaten the lives of everyone on Earth and could reduce to ash the civilizations humanity has forged over the millenniums.”

To counter such trends, writes Mr. Ikeda, the United Nations has made human rights education and protection of civilians its core responsibility through initiatives such as Human Rights Up Front of 2013 and Declaration on Human Rights Education and Training of 2011. Explaining that we are all interconnected, he encourages people to get in touch with their humanity and compassion and fostering a spirit of dialogue and empathy in order to break the cycles of violence and hatred.

Today, more than 15,000 nuclear warheads are extant worldwide, and with the policy of nuclear deterrence still in effect 25 years after the end of the Cold War, “approximately 1,800 nuclear weapons are on high alert, meaning they can be launched at an instant’s notice,” warns Mr. Ikeda. In case of an imminent nuclear attack, the logic of deterrence requires being able to retaliate at any time to forestall an enemy strike and such threat “becomes a constant and unavoidable burden.”

“Given the lethal risks of nuclear weapon detonation resulting from accident or error,” Mr. Ikeda urges leaders of the U.S. and Russia “to engage in dialogue toward taking their weapons off high alert” and to contribute to nuclear arms reduction.

He concludes the editorial by stating his hopes for the upcoming nuclear-weapon ban talks and for people to express their support toward the enactment of this “unique form of people-driven international law.”

[Read full text of “Time for a Treaty to Bring an End to Nuclear Danger.“]

[Reported in the March 3, 2017, issue of the Seikyo Shimbun, Soka Gakkai, Japan]