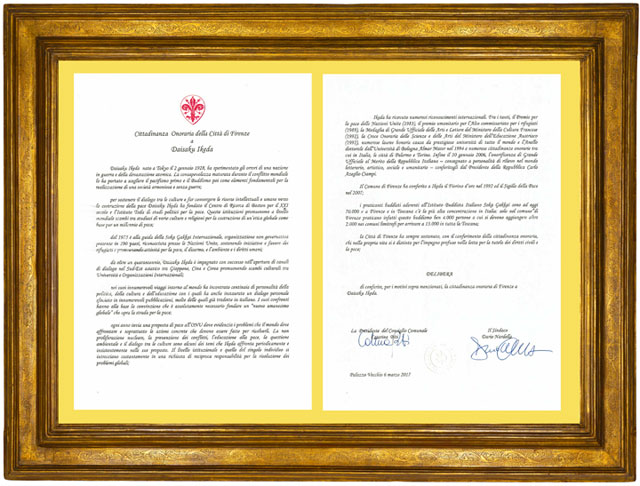 On March 11, 2017, the City of Florence in Italy, conferred honorary citizenship upon SGI President Daisaku Ikeda in recognition of his manifold contributions to peacebuilding and the renaissance of human spirituality. The presentation by proxy took place in the Salone dei Cinquecento of Palazzo Vecchio, Florence's city hall. Palazzo Vecchio is an historic landmark dating to the fourteenth century that houses a wealth of Renaissance artwork such as the renowned Michelangelo sculpture, "Genius of Victory." Some 600 people attended the public ceremony, including Florence Mayor Dario Nardella, municipal council members and SGI-Italy representatives.

In his conferral speech, Mayor Nardella lauded Mr. Ikeda’s lifelong dedication to peace through dialogue, stating that he has been an inspiration for people to strive toward the creation of a society in which they can freely realize their dreams. In this sense, he said, Mr. Ikeda is not only a mentor to Buddhists, but to people everywhere.

Following Mr. Nardella’s speech, the certificate of honorary citizenship was signed by the mayor and City Council President Caterina Biti, and entrusted to SGI Vice President Hiromasa Ikeda, who accepted it on his father’s behalf.

In a message to the ceremony, Mr. Ikeda expressed his heartfelt appreciation for the honor and recalled his past several visits to the “city of flowers,” which he said has never failed to rejuvenate him and inspire his creativity. It was his hope, as Florence’s new citizen, he said, to cultivate together with the youth of SGI a flower garden of humanism within global society that flourishes with a culture of peace and coexistence, creativity and the solidarity of youth. He described Florence as a city bursting with youthful energy. He remarked that upon his visit some 36 years prior, he had been welcomed to the city by a contingent of Italian youth whose vibrancy and passion had inspired in him the vision of a boundless and hope-filled future.

He concluded his message by praising Florence as a city of people infused with wisdom and indomitable courage, who, when united have the potential for awe-inspiring accomplishments. He expressed his hope to help create together with them a global society of peace and humanism in which no one is left behind.

In 1992, Mr. Ikeda received the Fiorino d'Oro Coin, another of Florence's prestigous awards given to outstanding individuals in the fields of science, culture and the arts. And in 2007 he was awarded the “Florentine Republic Seal of Peace“, one of the city's highest honors.

[Adapted from an article in the March 13, 2017, issue of the Seikyo Shimbun, Soka Gakkai, Japan]