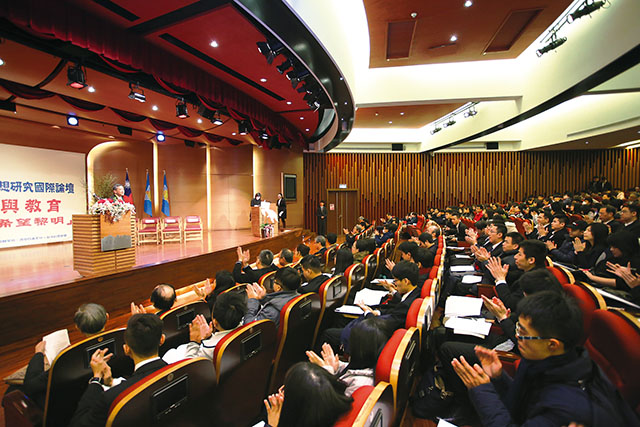 On March 2, 2017, the Chinese Culture University (CCU) in Taipei, Taiwan, sponsored an annual international forum focusing on research into Daisaku Ikeda's peace philosophy. The title for this year's forum, which drew around 400 Taiwanese and Japanese scholars and students, was “The Global Solidarity of Youth: Ushering in a New Era of Hope,” taken from Mr. Ikeda's 2017 peace proposal released in January.

Researchers and scholars representing 21 universities from Japan and Taiwan presented 28 papers on the theme of “Transforming Lives—Respecting the Dignity of All,” sharing their research on Ikeda’s philosophy on wide-ranging topics including culture, education, peace and the economy.

CCU, which celebrates its 55th anniversary this year, entered into an academic exchange with Soka University in 1995. In 2003, it presented Mr. Ikeda, Soka University’s founder, with an honorary doctorate, and in 2004 established the Daisaku Ikeda Research Center on its campus. The annual international forum presenting papers on Ikeda's philosophy was launched in 2007.

In his opening remarks, CCU President Li Tian-ren reflected on CCU’s 20-plus years of exchanges with Soka University and remarked that it all began from the close friendship nurtured between CCU Board of Regents Chair Chang Jen-hu and Mr. Ikeda while collaborating on a dialogue, Kyoiku to bunka no odo (The Noble Path of Education and Culture), which has been published in Japanese and traditional Chinese.

Former CCU President Lin Tsai-mei commended Mr. Ikeda for raising people’s awareness of and pursuing concrete solutions to various global issues and stressed the crucial role of education in fostering capable youth who will contribute to society as an essential step in creating a peaceful society.

In a message for the forum, Mr. Ikeda, addressing the theme “Transforming Lives—Respecting the Dignity of All,” said he was reminded of the words of Sun Yat-Sen (1866–1925): “The people are king.” Every person, without exception, he said, has a profound mission that only they can fulfill, as well as boundless potential and a hope-filled future.

He then discussed the UN’s Sustainable Development Goals (SDGs)—a universal call to action to end poverty, protect the planet and ensure that all people enjoy peace and prosperity—which, he said, are underscored by the principle that no one should be left behind. This spirit corresponds with “Respecting the Dignity of All” and the focal point of “Transforming Lives”—that is, endeavoring to inspire people to unleash their true potential and discover creative means to construct a new era.

In conclusion, referring to Buddhist scriptures that state, “If the roots of a tree reach far down, then its branches will flourish,” Mr. Ikeda expressed his confidence that the annual symposium would continue to thrive in like manner, proliferating sturdy branches, verdant leaves and flowers of happiness and bringing to bear magnificent fruits of humanistic education that will enrich people’s lives.

[Adapted from an article in the March 22, 2017, issue of the Seikyo Shimbun, Soka Gakkai, Japan]