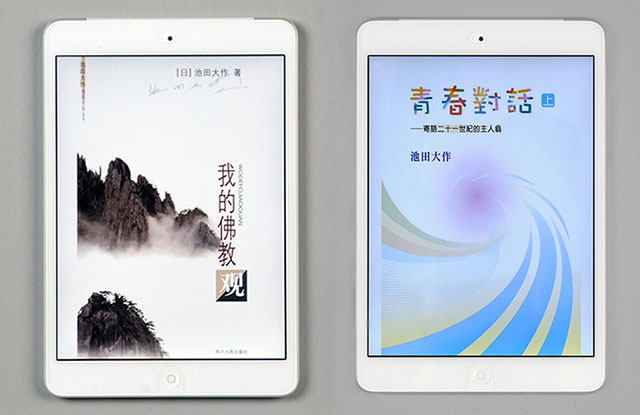 Chinese editions of works by Daisaku Ikeda were recently released in electronic format; Buddhism, the First Millennium and The Flower of Chinese Buddhism in simplified Chinese, and Discussions on Youth in traditional Chinese, in two parts.

Buddhism, the First Millennium explores the history of Buddhism during the centuries following the death of Shakyamuni, while The Flower of Chinese Buddhism offers a narrative on the spread of Buddhism across Asia, from the Indian subcontinent—the land of its birth, to China—where Buddhism was transformed into a world religion, and eventually reaching Japan. Both books offer insights from the history of Buddhism, which has now spread as a universal philosophy for humanity, and examine values that are deemed important in these modern times.

In Discussions on Youth, Mr. Ikeda responds to the myriad of anxieties and harsh realities that universally confront young people and details practical ways for the youth to overcome problems, inspiring courage and hope in their lives.

These books, which have been translated and published in various languages, are now available in an easily accessible electronic format for readers all across the globe.

[Adapted from articles in the March 17 and March 23, 2017, issues of the Seikyo Shimbun, Soka Gakkai, Japan]