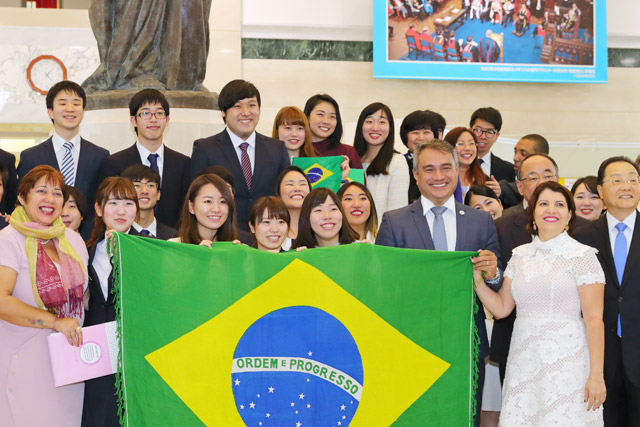 The Federal University of Acre (Universidade Federal do Acre, UFAC) in the Federative Republic of Brazil presented an honorary doctorate to Soka University (SU) founder Daisaku Ikeda in recognition of his dedication to building lasting peace and realizing a world without war and safeguarding the happiness, dignity and equality of humankind.

The conferral took place on March 28, 2017, on the SU campus in Tokyo. UFAC Rector Minoru Martins Kinpara entrusted the award to SU President Yoshihisa Baba, who accepted it on Mr. Ikeda’s behalf. Also in attendance were Rector Kinpara’s wife, Associate Professor Degmar Aparecida Ferreti; Associate Professor Márcia Verônica Ramos de Macêdo; SGI-Brazil General Director Julio Kosaka; Vice General Director Celso Hama; and exchange students from Brazil studying at SU. Rector Kinpara, a UFAC graduate who has served as rector since 2012, received SU’s Award of Highest Honor as well as the Friendship Award and remarked how thrilled he was to be visiting Japan, his father’s native country, to explore his roots.

Located within the Amazon, the world’s largest rainforest, UFAC was founded as a law school in 1964 and federalized as a university in 1974. Its main campus in Rio Branco, Acre’s capital, has a zoological and botanical garden 200 hectares in size. Over 12,000 undergraduate and post-graduate students study in 40 programs and departments including medicine, law, and electrical engineering. With strong emphasis on education and research activities corresponding to societal needs, UFAC also provides off-campus lectures to people living in remote areas of the Amazon and to the underprivileged. Their efforts have broadened opportunities for learning in the local communities and have fostered capable individuals who give back to society as doctors, lawyers and engineers.

In a citation, Rector Kinpara explained how significant it is for UFAC, as a university upholding humanistic values, to confer this honor to Mr. Ikeda, whom he considers a person of remarkable character befitting the greatest respect and praise. Commending Mr. Ikeda for his contributions to education and establishing the Soka School system to fulfill his promise to his mentor, Rector Kinpara stated that the philosophy of Soka education is vital in order to build a sustainable world rich in humanism.

In an acceptance message read by proxy, Mr. Ikeda expressed his deep appreciation for the honor and for being welcomed as a member of a university with such exalted ideals and history that shares similar mottos as SU. He concurred with Rector Kinpara’s belief that “Dialogue is the one and only path to forging a university,” stating that dialogue is a value shared by SU. Lamenting the ever-increasing outbursts of violence and deepening rifts in today’s society, Mr. Ikeda underscored the significance of promoting exchanges between universities worldwide centered on the culture of dialogue.

From left to right:UFAC Rector Kinpara (4th from right) entrusts the certificate of honorary doctorate for founder Ikeda to SU President Baba (4th from left)

[Adapted from an article in the March 29, 2017, issue of the Seikyo Shimbun, Soka Gakkai, Japan]