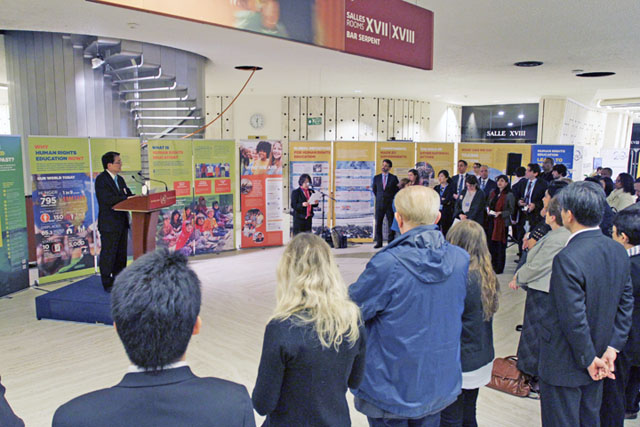 From left to right: Hirotsugu Terasaki, SGI Director General of Peace & Global Issues, speaking and sharing the SGI President’s message at the launch of “Transforming Lives”

SGI President Daisaku Ikeda, who has long asserted that the United Nations must serve as the key venue and focus for peace efforts, sent a message to the opening of the exhibition. He called on people to create an egalitarian and inclusive society by not only becoming advocates for human rights themselves but also "actively working to create an ethos within society that refuses to tacitly accept human rights abuses arising from hatred and prejudice." The SGI's social engagement, which includes collaboration and engagement with a range of individuals and organizations to promote human rights education, is based, he said, on one of the central tenets of Buddhism: "that all people innately possess a state of life of ultimate dignity; that we are all in this sense equal and are entitled to have that dignity respected at all times." [Read full message]

[Adapted from a press release of the Soka Gakkai Office of Public Information, Tokyo, and an article in the March 8, 2017, issue of the Seikyo Shimbun, Soka Gakkai, Japan]