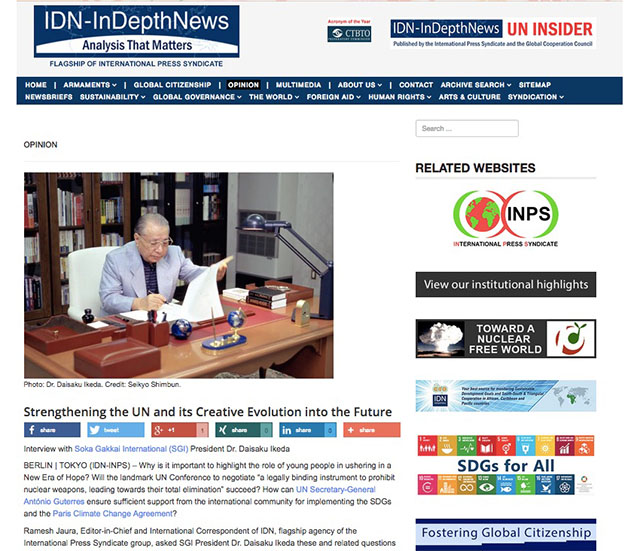 When asked in a recent interview about the prospects for the United Nations and the international community in implementing the Sustainable Development Goals and Paris Climate Change Agreement under the leadership of the new UN Secretary-General António Guterres, SGI President Daisaku Ikeda responded:

I am confident that the new secretary-general’s focus on a culture of prevention and gender equality will drive progress in the UN’s undertakings. . . . To this end, it is, as I’ve already noted, crucial that collaboration between the UN and civil society be strengthened across all sectors. In particular, I think it is absolutely vital that greater efforts be made to create opportunities for the active engagement of youth.

The interview, titled “Strengthening the UN and its Creative Evolution into the Future,” was conducted by Ramesh Jaura, Editor-in-Chief of IDN, a flagship agency of the International Press Syndicate group that provides in-depth news on a wide range of global issues. Mr. Jaura followed up with Mr. Ikeda on issues he highlighted in his 2017 peace proposal published earlier this year. He asked questions related to the role of youth in forging a global solidarity amid the current climate of uncertainty in international affairs; his expectations of the upcoming UN conference to negotiate a nuclear weapons ban; thoughts on US–Russia relations; and the future of the UN.

In regards to how young people can promote global solidarity, Mr. Ikeda stated:

I believe that the crucial starting point for coming together across various differences and forging unity is shared awareness, shared concern. By this I mean the sense of anguish we all naturally feel at the plight of refugees, for example, or the strong desire to stop environmental destruction, or to seek a world without war. . . . Even if we speak of “global solidarity,” the really important thing is not the scale of effort, but the depth and strength of individual human connections. This is a measure of the strength of solidarity—the kind of solidarity that can meet difficult challenges and transform reality. Friendship shared among individuals is the essence of global solidarity of youth.

When asked about his hopes for the second session (June 15–July 7) of the UN Conference to negotiate “a legally binding instrument to prohibit nuclear weapons, leading towards their total elimination,” Mr. Ikeda stressed the importance of the participation of as many countries as possible.

This of course includes the nuclear-weapon states and the states that rely on them for extended deterrence—states that were almost entirely absent from the first session. We need to remember that the sharply divergent viewpoints do not make dialogue impossible; they make it necessary. . . . It is my hope that the second session will, like the first, provide opportunities for open debate with participation of civil society, and that the drafting of a nuclear weapons prohibition treaty will proceed as a shared global undertaking with an eye to adoption by the end of the session.