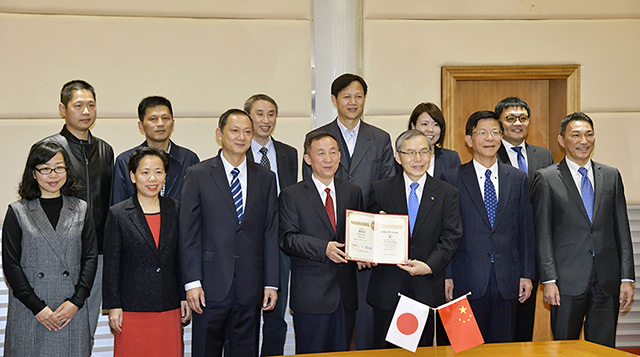 On November 9, 2017, China’s Hubei University conferred an honorary professorship upon Soka University founder and SGI President Daisaku Ikeda for his contributions to world peace, advancing education on an international level and promoting Sino-Japanese friendship and exchange between civilizations.

Soka University President Yoshihisa Baba, visiting from Japan, accepted the certificate of appointment on Mr. Ikeda’s behalf at a conferral held at Hubei University’s main campus in the Wuchang District of Wuhan, the capital of Hubei province and the most populous city in the Central China region. Hubei University Vice President Jiang Tao, Party Committee Secretary Shang Gang, staff and faculty of the university, and a delegation from Soka University were among the attendees. An academic exchange agreement between the two institutions was also signed on this occasion.

Originating in 1931 from what was then the Hubei Provincial College of Education, Hubei University (a name it has adopted since 1984) was established as a joint effort between the Hubei provincial government and its education department. It changed locations and names several times in the history of its development and currently stands as the province’s key comprehensive university with 3 campuses, 18 faculties and a student enrollment of 24,000. Its courses in chemistry and material sciences, in particular, are recognized as among the top notch in the world. With a focus on international exchange, Hubei University has established academic agreements with more than 110 institutions in 30 countries and territories. Mr. Ikeda visited the university in April 1975 during his third visit to China.

In a citation, Party Committee Secretary Shang remarked that Mr. Ikeda has not only made remarkable achievements in promoting a global education and exchange across civilizations, but as an early proponent of the normalization of diplomatic ties between China and Japan, he has also made leading contributions to improving Sino-Japanese friendship throughout the years. Mr. Shang also lauded Soka Gakkai and Soka University’s efforts to send forth countless capable individuals into society espousing the ideal of contributing to the happiness of humankind and promoting peace, culture and education toward that aim. The newly established academic exchange agreement between Soka University and Hubei University, he remarked, is certain to draw forth both institutions’ strengths and serve as a model for higher education and international exchange in both China and Japan.

In an acceptance message, Mr. Ikeda expressed his heartfelt appreciation for the honor and deep respect for University Party Committee Secretary Shang and President Zhao Lingyun, under whose leadership the university has marked continued growth as a world-class higher education institution. The year 1930, which marked Hubei University’s founding, was also the year that first Soka Gakkai President Tsunesaburo Makiguchi published his educational work The System of Value-Creating Pedagogy, marking the founding of the Soka Gakkai. Commenting on their shared history, Mr. Ikeda expressed his desire to dedicate the accolade to President Makiguchi. He also described his hopes for the youth who will shoulder the challenges of the 21st century to learn from the institution’s tradition and spirit of “ceaselessly pressing forward to surmount all hardship and advance in triumph.”

Further, in reference to the new academic agreement between the two institutions, Mr. Ikeda stated: “Just as the Yangtze and Han rivers merge, I am confident that the merging of the educational streams of Soka University and Hubei University will only serve to strengthen the beautiful network of global citizens and expand the fields of peaceful coexistence across the world.”

[Adapted from an article in the November 10, 2017, issue of the Seikyo Shimbun, Soka Gakkai, Japan]