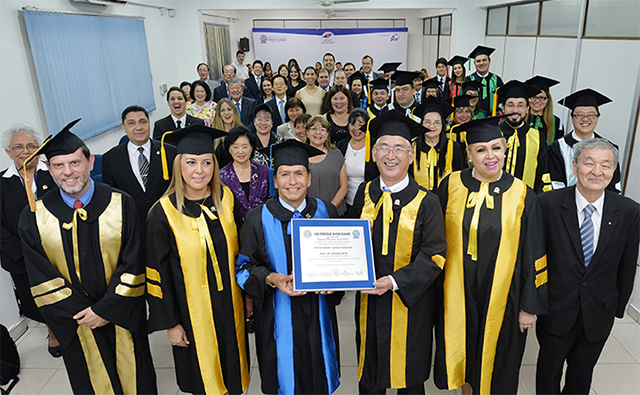 Located in the city of Fernando de la Mora in the metropolitan area of Asunción, Paraguay's capital, the Nihon Gakko University (literally, "Japan School University") was founded by Rector Dionisio Ortega and his wife, Vice Rector Hermelinda Alvarenga de Ortega, in 2008. Inspired by their experience of studying abroad at a public university in Japan in 1991, the couple, who had majored in comparative education, dreamed of bringing together traditional Japanese cultural and educational values to create a unique model of humanistic education in Paraguay. They first established a kindergarten and elementary school called "Nihon Gakko" in Fernando de la Mora in 1993, which introduced students to Japanese language and culture while cultivating their identity as Paraguayans. Aimed at fostering students who can contribute to Paraguay, Japan and the global society at large, Nihon Gakko University consists of five fields of concentration, including education and humanities, science and technology, and business. Its Education and Humanities Department, in particular, has been highly appraised by national higher education accreditation organizations.

Rector Ortega and Vice Rector Alvarenga first learned about the SGI and Mr. Ikeda through their friends. Moved by his leadership of the SGI's movement for peace, culture and education and his writings, they decided to present Mr. Ikeda with the Honorary Doctorate as a symbol of their respect for his life work. Mr. Ortega has said: "In this strife-filled world, it is imperative that people continue to take action to build a peaceful society. What is most important is action—not mere talk, and Dr. Ikeda has demonstrated this throughout this life."

In a message for the occasion, Mr. Ikeda expressed his appreciation for the honor and his profound respect for the Ortegas' dedication to the noble task of education. Touching upon the founding values of Soka education and first Soka Gakkai president Tsunesaburo Makiguchi, for whom children's happiness was a foremost priority while serving as an elementary school principal in post-war Japan, Mr. Ikeda affirmed that the ideals of Nihon Gakko University powerfully resonate with the humanistic spirit of Soka education. Though it may go unnoticed, he said, the power to transform the times—the driving force to stabilize and advance society—lies in the steady yet gradual progress of education, the task of inspiring each young person to become capable individuals. In conclusion, Mr. Ikeda conveyed his gratitude to all those in attendance and sent his prayers for the continued development of the university.

[Adapted from an article in the October 16, 2017, issue of the Seikyo Shimbun, Soka Gakkai, Japan]