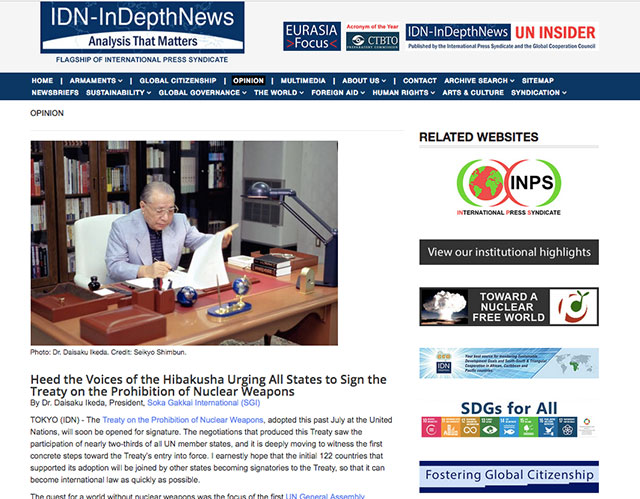 SGI President Daisaku Ikeda has called for the early entry into force of the Treaty on the Prohibition of Nuclear Weapons, which opened for signature on September 20, 2017, at UN Headquarters in New York.

He strongly urges Japan, the only country to have experienced the use of nuclear weapons in wartime, to join the treaty, calling for deliberations on how to achieve this to be undertaken promptly and in earnest. In addition, he highlights the contributions of the survivors of the nuclear attacks on Hiroshima and Nagasaki, who “have struggled to the utmost in the hope of seeing the realization of a world without nuclear weapons in their lifetimes.” His article has been published by IDN-InDepthNews on September 18, 2017.

SGI representatives attended the opening ceremony for the signing of this historic document as part of one of the civil society delegations invited by the UN. The treaty will enter into force 90 days after 50 states have deposited their instrument of consent to be bound (ratification, acceptance, approval or accession).

Mr. Ikeda has consistently called for the abolition of nuclear weapons in the peace proposals he has written annually since 1983, as well as promoting signature-gathering campaigns and educational activities to this end.

The Soka Gakkai Youth Division in Japan has just published Hiroshima and Nagasaki: That We Never Forget, a collection of 52 experiences of victims of the atomic bombings of Hiroshima and Nagasaki in English. Hirotsugu Terasaki, SGI Director General of Peace and Global Issues, comments, “I ask you to read these painful accounts. This is the reality of nuclear weapons from which we must not turn our heads. How can we discuss the nuclear weapons issue without understanding this reality?”

Soka Gakkai and the SGI have been engaged in efforts toward the abolition of nuclear weapons for 60 years, since Josei Toda, second president of the Soka Gakkai, issued his Declaration Calling for the Abolition of Nuclear Weapons in September 1957.

[Read the full text of the IDN-InDepthNews opinion editorial, “Heed the Voices of the Hibakusha Urging All States to Sign the Treaty on the Prohibition of Nuclear Weapons.”]