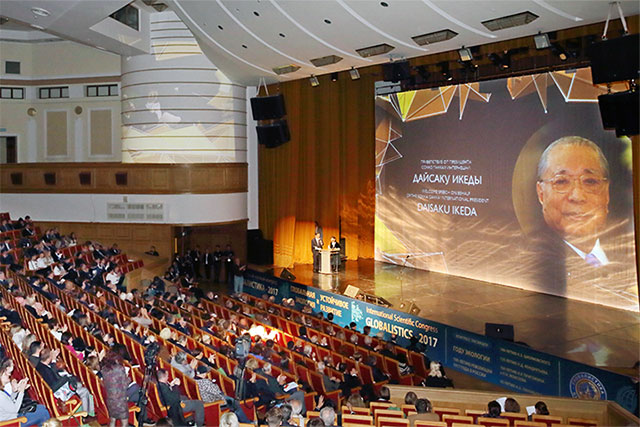 “Globalistics 2017,” an international congress of some 1,500 scientists and researchers from 50 countries, was held at Russia’s Moscow State University (MSU) from September 25–30, 2017. During the last session of the opening day, SGI President Daisaku Ikeda was recognized as an official member of the International Global Research Academy, one of the organizing partners, for his “academic and practical contributions toward globalization.” SGI Vice President Hiromasa Ikeda, who was invited to attend the congress with other members of an SGI delegation visiting Russia from Japan, accepted the certificate of membership on his father’s behalf. Mr. Ikeda’s message for the occasion was also introduced.

The “Globalistics” international scientific congress, held for the fifth time this year under the auspices of UNESCO, aims to serve as a leading platform for the exchange of scientific knowledge and expertise and the development of international cooperation in the area of global studies. Initiated by MSU’s Faculty of Global Processes, it was organized in cooperation with some 17 institutions including the Institute of World Economy and International Relations (IMEMO) and the Moscow State Institute of International Relations (MGIMO). With 2017 designated as the Year of Ecology in the Russian Federation by the decree of Russian President Vladimir Putin, this year’s congress focused on global ecology and sustainable development.

Based out of MSU’s Faculty of Global Processes, the International Global Research Academy, who presented Mr. Ikeda with a certificate of membership, was formed in 2014 to carry out joint scientific research on global processes, systems and problems and serve as a common space for exchanging information between those in the field. Its members comprise researchers and specialists from over 30 countries in various fields including energy, environment, economics and spiritual culture.

In his acceptance message, Mr. Ikeda expressed his appreciation to the congress organizers—particularly MSU Rector Victor A. Sadovnichy, IMEMO President Alexander Dynkin, and MGIMO Rector Anatoly Torkunov—for the invitation to the event and the honor of being selected as a member of the International Global Research Academy. In an age of eroding connections between nature and humanity, he stressed the importance of reviving this inherent connection, protecting it and transmitting it to future generations for the sake of humanity’s survival. In that regard, he said it is vital to foster a global ecology that makes sustainable development the shared responsibility of those alive today, a duty we owe to the future. Citing the following passage from Nichiren’s writings, Mr. Ikeda also shared the profound and inseparable bonds between human life and the environment that Buddhist wisdom expresses:

When spring comes and conditions of wind and rain prevail, then even the mindless plants and trees will all put forth buds, blossom in glory, and make their presence known to the world. And when autumn arrives with its conditions of autumn moonlight, then plants and trees will all ripen and bear fruit. Then they will nourish all sentient beings, sustain their lives, bring them to maturity, and in the end manifest both the virtue and the functions of Buddhahood."1

From this perspective, Buddhism encourages humanity to awaken to the inherent dignity of all life and live in accordance with the great compassionate rhythm of nature and the universe—that is, working for the happiness of oneself and others, living in harmony with nature, and striving for the peace of one’s nation and a prosperous future, he said.

Mr. Ikeda and MSU Rector Sadovnichy share a longstanding, decades-long friendship. They have published three dialogues together. Soka University, founded by Mr. Ikeda, was the first Japanese institution of higher learning to enter into an academic exchange with MSU in 1975, one year after Mr. Ikeda first visited the then Soviet Union. Since then, over 500 students from both universities have traveled to and studied at their partner institution in Moscow or Tokyo. In June of last year, Soka University became the first Japanese institution to establish a center for Russian studies on its campus. Dr. Sadovnichy visited the center later in the year when he was in Japan for a diplomatic engagement. Mr. Ikeda, who visited MSU on six occasions, is also a recipient of an honorary doctorate from the university in 1975 and an honorary professorship in 2002.

[Adapted from an article in the September 28, 2017, issue of the Seikyo Shimbun, Soka Gakkai, Japan]

1Nichiren, “The Unanimous Declaration by the Buddhas of the Three Existences regarding the Classification of the Teachings and Which Are to Be Abandoned and Which Upheld,” The Major Writings of Nichiren Daishonin, Vol. 2, p. 861.