On April 18, 2018, the National University of Tierra del Fuego (UNTDF) in the Argentine Republic conferred an honorary doctorate upon Soka University (SU) founder and SGI President Daisaku Ikeda in recognition of his lifelong dedication to peace, culture and education based on humanistic values, as well as his contribution to higher learning. The conferral ceremony was held at the SU campus in Tokyo and was attended by UNTDF Rector Juan José Castelucci and Secretary General Diego Machado. SU President Yoshihisa Baba received the award on Mr. Ikeda’s behalf.

Located in Ushuaia City, one of the southernmost cities in the world, UNTDF was formally established on December 28, 2010, and has eleven undergraduate and four post-graduate schools along with four institutes. Surrounded by the Andes and exposed to low temperatures, the university has contributed to environmental protection by fostering capable people engaged in preserving the natural environment.

Having suffered from civil strife in the 80s, the university places great importance on human education for peace. Rector Castelucci’s personal experience of being wrongfully incarcerated for five years during Argentina’s military dictatorship has led to the university’s vision of thoroughly respecting human rights and solidarity.

In a citation, Rector Castelucci explained that it brings great joy to him and UNTDF, a university that represents not only the people of Tierra del Fuego but also Antarctica and the South Atlantic Islands, to honor a man such as Mr. Ikeda who has dedicated his life to uniting and encouraging people. He stated that his encounters with Mr. Ikeda and the SGI have taught him to broaden his efforts to also tackle issues such as world peace and the abolition of nuclear weapons and other weapons of mass destruction, in addition to his advocacy for human rights and equality. He asserted his belief that promoting academic exchanges with other universities, building ties between the university and society and deepening bonds through endeavors to promote peace will contribute to the development and fulfillment of the university, to the betterment and growth of the students.

In an acceptance message, Mr. Ikeda expressed deep appreciation for the honor and for being welcomed as a member of a university founded on the ideal of creating an environment in which all people who wish to learn can do so. He stated that a university that offers exceptional human education is like a lighthouse that illuminates the people, inspiring them to “trust in the virtues of life,” “challenge themselves in their human revolution” and aspire to “a harmonious coexistence and mutual prosperity that transcends all differences.” He shared his hope to build such a lighthouse of trust and friendship through educational exchanges around the world. 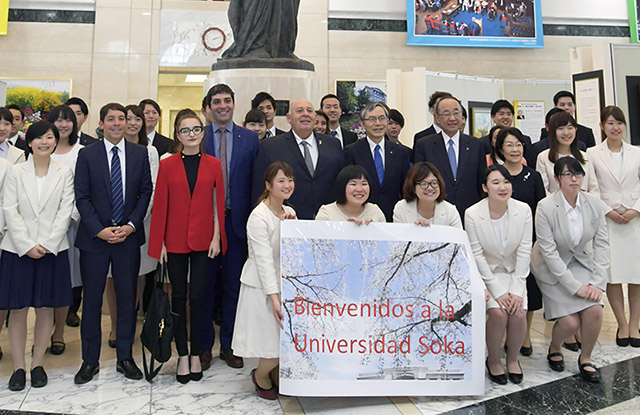 UNTDF Rector Juan José Castelucci (center, behind poster), and the delegation from the Argentinian university take a commemorative photo with SU President Baba (to the rector’s right), SU officials and student representatives

[Adapted from an article in the April 19, 2018, issue of the Seikyo Shimbun, Soka Gakkai, Japan]