After establishing an elementary school in 1982 and a high school six years later, Professor Rodríguez founded UCP in 1993 with the aim of fostering capable individuals who will contribute to the development of their communities. Some 6,000 students study on the nine campuses of UCP, which offers courses in five faculties: Art, Design and Communication; Business Administration; Political Science; Technical Engineering; and Psychology, Education and Human Relations. The university also provides adult education classes for the elderly and young people who are unable to enroll in regular college classes.

In a citation, Rector Rodríguez commended Mr. Ikeda as a social activist and educator who has founded institutions based on an educational philosophy centered on the creation of value. Humanity, the Rector said, is facing a pivotal time, and experts in every sector of society are sounding an alarm of a civilization in crisis. Remarking that Mr. Ikeda, in his annual peace proposals, addresses such issues as human security and respect for life, he said we should learn from the SGI leader’s approach. Each person should recognize that they are a powerful protagonist and challenge themselves to transcend egoism and support one another.

In a message read by proxy, Mr. Ikeda expressed his gratitude to the University community, beginning with Rector Rodríguez and the faculty members, for the accolade. Hearts can be united despite any physical distance, he said, affirming that the diplomatic relations established between Argentina and Japan 120 years ago symbolized such friendship. He shared that the Min-On Concert Association he founded has been inviting Argentine Tango artists and orchestras to perform in Japan since the launch of its popular Min-On Tango series in 1970, and is presently hosting a 28-concert Japan tour.

Mr. Ikeda expressed admiration for the university’s motto, “Learning will transform your life,” as an exalted message of hope. He also found consonance in the encouragement Rector Rodríguez gives graduates: More important than a grasp of leading-edge technology, what society requires of the graduates is the altruistic spirit to integrate the knowledge they have gained with social contributions toward helping those around them find solutions to problems they face. Further, Mr. Ikeda remarked, this noble creed deeply resonates with the philosophy of Soka education for fostering global citizens who aspire to lead value-creative and contributive lives. 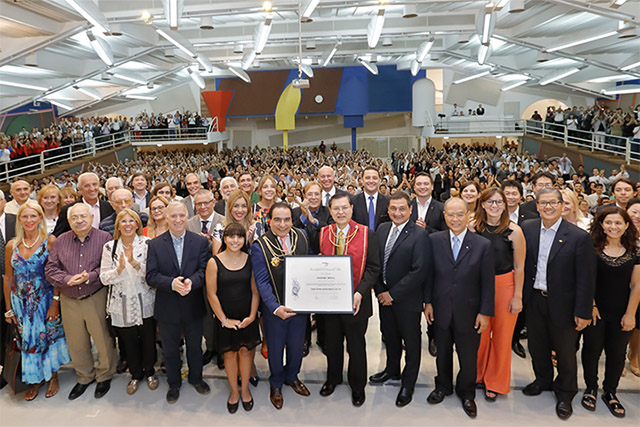 [Adapted from an article in the February 28, 2018, issue of the Seikyo Shimbun, Soka Gakkai, Japan]