Chung Hua University (CHU) in Hsinchu City, Taiwan, presented Soka University founder and SGI President Daisaku Ikeda with an honorary professorship in recognition of his dedication to world peace through the promotion of cultural and educational exchanges on a global scale.

The Taiwanese university opened in 1990 as a polytechnic college and attained university status in 1997. Some 7,000 students study in its 6 colleges and 25 departments offering undergraduate courses, 14 masters programs and 2 doctoral programs.

The mission of CHU, aside from developing educational excellence, stated President Liu, is to foster capable individuals grounded in a philosophy of respect for life, dedicated to serving others and contributing to the value of good to society. He affirmed that the “student first” educational philosophy of Mr. Ikeda finds consonance with CHU’s people-centered education.

President Liu said he hoped to share with all CHU staff and students the achievements of Mr. Ikeda, who has continued to uphold a philosophy of humanism and dedicate his life to peacebuilding. It behooved them to continue studying his philosophy to find solutions to the world’s social turmoil, he said.

In a message, Mr. Ikeda expressed his deep appreciation for the honor and his wish to share it with the SGI-Taiwan members, who have long contributed to Taiwanese society as model citizens. Referring to words of renowned Japanese businessman and industrialist, Panasonic founder Konosuke Matsushita, Mr. Ikeda said any undertaking begins with the training of good staff and any enterprise whose people are not developing cannot succeed. He lauded CHU’s program of holistic education (called Sunshine Youth) for fostering in students innovative thinking and artistic sensibilities with an integrated approach to holistic development of the whole person.

Mr. Ikeda believes if young people stand in solidarity on the fertile soil of humanistic education and take each others’ hands as global citizens bound together by friendship and trust, they can remain steadfast in the wake of any adversity that may assail them in the future. He affirmed his commitment to helping CHU foster students into a powerful, united force dedicated to the happiness and peace of humanity and global society. 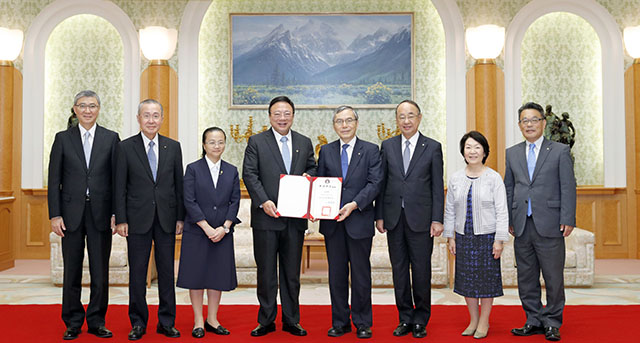 [Adapted from an article in the July 31, 2018, issue of the Seikyo Shimbun, Soka Gakkai, Japan]