Federal University of Paraíba (UFPB), Brazil, presented Soka University founder Daisaku Ikeda with an honorary doctorate in recognition of his contributions to advancing peace, culture and education. The conferral by proxy took place at the Soka University Central Tower in Hachioji, Tokyo, on June 13, 2018. Representing UFPB at the ceremony were Rector Margareth de Fátima Formiga Melo Diniz, Dr. Walmir Rufino da Silva, Director of the Center of Applied Social Sciences and Dr. Henry Iure Paiva Silva, Vice Director of the Department of International Relations, as well as Minister-Counselor Francisco Pessanha Cannabrava of the Embassy of the Federative Republic of Brazil in Japan. Also in attendance were 40 members of Brazil SGI who had traveled to Japan on the occasion.

UFPB, whose main campus is located in João Pessoa, is one of two major institutions of higher learning in Paraíba State with an enrollment of 40,000, including graduate programs.

The citation read by Rector Diniz lauded the Soka education system promulgated by Mr. Ikeda, which has as its goal the happiness and holistic development of each child. UFPB concurs, she said, with the SGI’s ideals of global citizenship, tolerance and respect for human rights. She looked forward to educational collaborations with SGI.

The rector also referred to Mr. Ikeda’s published dialogue with the human rights activist and Brazilian Academy of Letters President Austregésilo de Athayde, Human Rights in the Twenty-first Century, saying the two shared a common vision of peace and social justice. In the dialogue, Athayde remarks that both he and Mr. Ikeda are “striving to define the optimum form for a new humanism. . . . Your goal is to contribute to the welfare and improvement of humanity. . . . Mine has been to do the same thing by means of the Universal Declaration of Human Rights. The two aims coincide.”

In a message for the conferral, Mr. Ikeda expressed his appreciation for the accolade, which he said was an honor he shared with SGI members in Brazil. Noting that June 18 was the 110th anniversary of the arrival of the first wave of Japanese immigrants to Brazil, he recalled his encounter in 1988 with one of those immigrants, Ryoichi Kodama from Hiroshima, who had arrived in the Port of Santos in São Paulo as a 13-year-old boy. Mr. Ikeda remarked on how Mr. Kodama had described being warmly embraced by the Brazilian people, and how he had drawn strength and inspiration in his challenging circumstances from the sense of hope that flowed from their natural optimism and energy in the face of life's hardships.

Reflecting on the Brazilian university’s motto, “Develop Wisdom,” he noted that Tsunesaburo Makiguchi, father of Soka education, had placed foremost emphasis on wisdom, describing it as the capacity to direct knowledge, technology and information toward people’s happiness, and as the creative force that transforms adversity into peace and social prosperity.

Mr. Ikeda also spoke about the importance of solidarity. This was the core theme of a joint appeal to youth made by Mr. Ikeda and Nobel Peace Prize Laureate Adolfo Pérez Esquivel in June. It called on young people to commit themselves to bringing about a new dawn of hope, with the conviction that “there is no challenge that cannot be resolved if we unite in solidarity.”

In conclusion, Mr. Ikeda asked the young people of Brazil, beginning with UFPB students, to strive together to illuminate society with the “sun of hope,” the “sun of wisdom” and the “sun of solidarity.” 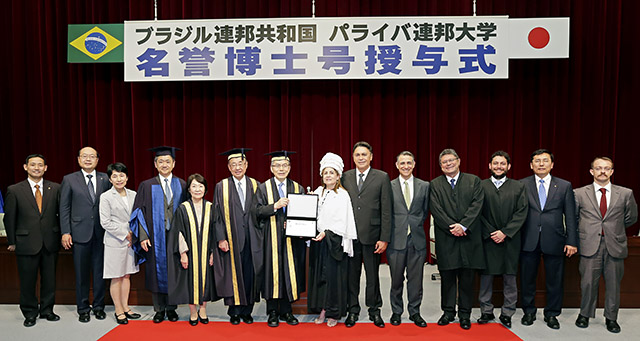 [Adapted from an article in the June 14, 2018, issue of the Seikyo Shimbun, Soka Gakkai, Japan]