On June 21, 2018, Cagayan State University (CSU) in the Republic of the Philippines conferred the degree of Doctor of Humane Letters, honoris causa, upon Soka University (SU) founder and SGI President Daisaku Ikeda. He was recognized for his lifelong contribution to advancing education and peace. The conferral, which took place at the SU campus in Tokyo, was attended by CSU President Urdujah A. Tejada, Technical Advisor Florentina S. Dumlao, Board Secretary Joey L. Cauilan, and Information Officer Ana Marie Cristina C. Cauilan. SU President Yoshihisa Baba received the award on Mr. Ikeda’s behalf.

The conferral of the honorary degree was unanimously approved by the academic council of over 800 professors and the university’s Board of Regents.

Established in 1978, Cagayan State University is the largest state institution of higher learning in the Cagayan Province and offers courses in liberal arts, agriculture and medicine, among others, to over 30,000 students at their eight campuses. Since its founding, CSU has provided extension programs, which aim to build a sustainable society through various research and activities including contribution to environmental preservation and support for underprivileged communities. Such efforts are grounded in the university’s philosophy of serving the individual by providing each student with a nurturing environment for optimal flourishing and serving the community through programs responsive to individual and social needs. Among the university’s core values is establishing itself as a unifying presence for the Philippines and the world.

In a citation, President Tejada, who was appointed as the university’s first female president in October 2016, remarking on the academic tradition of universities to honor outstanding individuals stated it is in fact CSU that is privileged to recognize an individual such as Mr. Ikeda, “who is revered by communities that seek and work for peace both in Japan and throughout the world, for his dedication to the cause of world peace, understanding and cooperation.” President Tejada, citing compassion as the recognition of the suffering of others, stated that Mr. Ikeda is the world’s teacher of compassion as reflected by the “leitmotif of all that he has written, spoken about, worked for, and contributed immensely to,” and for these reasons, is deserving of the honorary doctorate.

In an acceptance speech, Mr. Ikeda expressed his heartfelt appreciation for the honor and commended the university for fulfilling its vision of “Transforming lives by educating for the best,” stating that CSU’s brilliant achievements are underscored by humanistic values that deeply resonate with Soka education. In reference, he quoted President Tejada, who has said true success is determined, not simply by fame and social standing but, by how we repay our debt of gratitude to individuals and communities who have helped foster us. Soka education founder Tsunesaburo Makiguchi, too, believed in the importance of leading a life of contribution, he said. Mr. Ikeda also stated that efforts made by CSU based on such ideals are consistent with the UN’s Sustainable Development Goal of “leaving no one behind” and is also be demonstrated by the Cagayan proverb, “Those who sow seeds of virtue will reap the fruit of appreciation.” 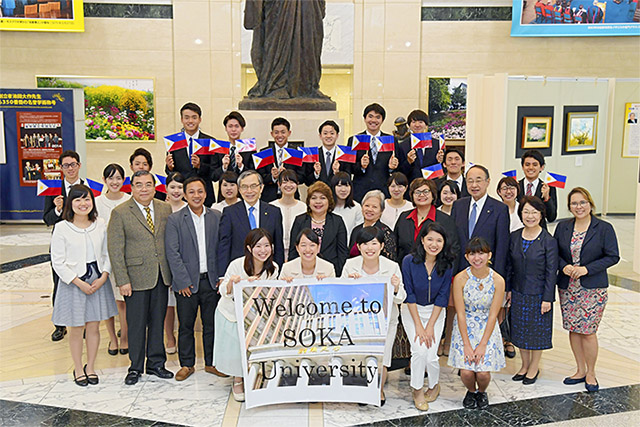 [Adapted from an article in the June 22, 2018, issue of the Seikyo Shimbun, Soka Gakkai, Japan]