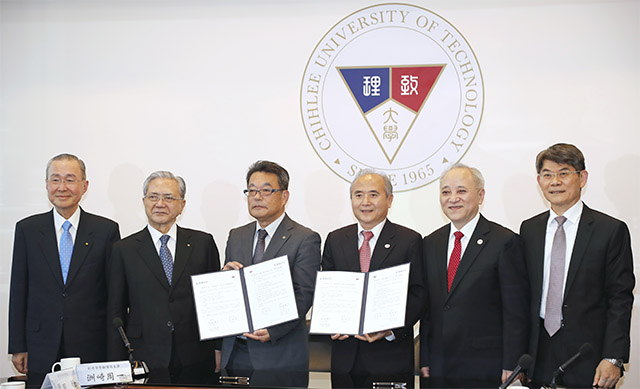 On March 1, 2018, Chihlee University of Technology in Taiwan presented Daisaku Ikeda, SGI president and Soka University founder, with its first honorary professorship in recognition of his lifelong contributions to world peace and fostering cultural and educational exchange on a global scale.

The award ceremony, held at the Chihlee campus in Taipei, was attended by Chairman Liang Shen Shue, President Shan Shih-Chang and other university dignitaries. Soka Gakkai President Minoru Harada accepted the certificate on Mr. Ikeda’s behalf. An academic exchange agreement was also signed between Chihlee University of Technology and Soka University on this occasion.

Chihlee was established in 1965 as a business school offering associate degrees in commerce-related fields. In 2000, it was upgraded by the Taiwan Ministry of Education to a full baccalaureate institution, and in 2015, to a university. With an expanded curriculum and a range of majors, Chihlee presently enrolls over 10,000 full-time students and offers a bachelor’s degree and an associate degree program. The Ministry of Education has given Chihlee high marks in the quality of education it provides.

In a citation, Chihlee President Shan said it was a great honor for the university to confer an honorary professorship upon Mr. Ikeda for his dedicated efforts for global peace through cultural exchange. “Mr. Ikeda’s founding of the Soka schools fostering students with a global outlook through a comprehensive education system from kindergarten through university levels is a concrete example of his belief that humanistic education forms the basis for building flourishing societies that are rich with humanity,” he said. In regards to the newly formed academic agreement between the two institutions, he commented, “We look forward to strengthening our relationship with Soka University as we work together to send forth outstanding individuals into the 21st century.”

In his acceptance message read by proxy, Mr. Ikeda began by conveying his deepest condolences and sympathy for those affected by the earthquake that hit the eastern coast of Taiwan the previous month. Expressing his profound appreciation for the honor, he said he hoped to share it with his fellow SGI-Taiwan members who have partnered with Chihlee University of Technology on cultural activities as well as continuing to contribute to Taiwanese society.

The SGI leader conveyed his deep respect for the exceptional leadership provided by Chihlee’s founder, Chairman Liang’s father, who strongly believed that education is the sole key to society’s security and advancement and fought to protect and establish the institution amid multiple setbacks. Apart from the pursuit of knowledge, the university stresses the importance of nurturing students who will work for the betterment of society with appreciation and empathy, he said. And its greatest attribute lies in its emphasis on education that takes into account the growth of the entire human being. In closing, Mr. Ikeda expressed his determination to continue working alongside the faculty and staff of Chihlee toward the shared goal of fostering global citizens capable of contributing to the peace and happiness of humankind.

[Adapted from an article in the March 2, 2018, issue of the Seikyo Shimbun, Soka Gakkai, Japan]