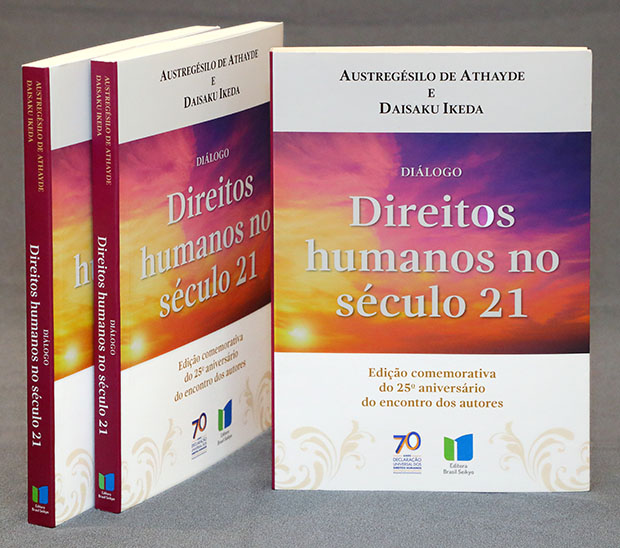 RIO DE JANEIRO, BRAZIL: Editora Brasil Seikyo released a new Portuguese edition of Human Rights in the Twenty-first Century, a dialogue between Daisaku Ikeda and former President of the Brazilian Academy of Letters Austregésilo de Athayde (1898–1993). A book launch was held on March 2, 2018, at the academy’s new building in Rio de Janeiro commemorating the 25th anniversary of Mr. Ikeda’s appointment as a non-resident member of the Academy and the 70th anniversary of the adoption the Universal Declaration of Human Rights (UDHR) in 1948. As the Brazilian representative to the United Nations at the time, Mr. Athayde played a crucial role in the drafting of the UDHR. The event was attended by Academy President Marco Lucchesi, former President Cicero Sandroni, representative members of the Academy, Mr. Athayde’s family and SGI Vice President Hiromasa Ikeda, who was visiting South America.

As a renowned Brazilian writer and journalist, Mr. Athayde dedicated over 30 years to the development of the Brazilian Academy of Letters, earning great respect and love from its members. Mr. Athayde and Mr. Ikeda first met 25 years ago in February 1993, just seven months prior to Mr. Athayde’s passing, when Mr. Ikeda was in Rio de Janeiro to accept the appointment of Non-resident Membership from the Academy. At that time, they promised to collaborate on a dialogue. Right up to his last moments, Mr. Athayde devoted his energies to completing their book through interviews and correspondence covering topics such as the history of the human rights movement leading up to the adoption of the UDHR and his views on education, peace and the environment. 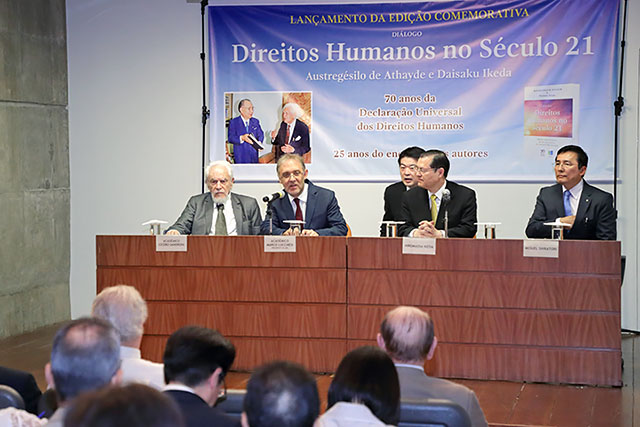 At the book launch, Vice President Ikeda shared his wish for the book by Mr. Athayde and his father to further strengthen friendship between Brazil and Japan, noting that this year, 2018, marks 110 years since the immigration of Japanese people to Brazil and the 120th anniversary of Mr. Athayde’s birth.

In a speech, Mr. Sandroni stated that Mr. Ikeda’s thoroughgoing struggles for peace through candid and open dialogue has served as a beacon illuminating the path toward peace for humanity. “We must aim for peace that will serve not only a segment of people but is equitable for all,” he said, remarking that peace cannot be realized without justice. He believed the Athayde–Ikeda dialogue would serve as a guidepost toward that end.

In the preface, Mr. Athayde expresses his ardent hope for their book to remain as an enduring legacy for human rights:

“This dialogue is more than an encounter between two human rights advocates. It presents posterity with a book by Daisaku Ikeda who, like me, has dedicated his utmost energies to the essential, indispensable, noble work of protecting the rights of all humanity. The two of us equally have shared the struggle. . . . As trusting, steadfast comrades, we both hope that our passionate dedication will be the determining factor in ushering in a day of salvation and of equality for men and women of all ages. Such equality will be free of prejudices and respectful of all religious sensibilities and creeds and will assure the basic principles of the Universal Declaration of Human Rights.”

[Adapted from an article in the March 6, 2018, issue of the Seikyo Shimbun, Soka Gakkai, Japan]