The Director and Vice Director, who are sisters, had been introduced by a friend to educator and first Soka Gakkai president Tsunesaburo Makiguchi’s magnum opus, The System of Value-Creating Pedagogy, and realized that his pedagogical theories strongly resonated with the educational ideals they espoused. When they learned that Mr. Ikeda had implemented Makiguchi’s educational philosophy by founding the Soka schools system as well as contributing to creating a world of peace, they decided to honor him. In 2011, FIJ named its library the Dr. Daisaku Ikeda Library; this time, Vice Director Mafra Trindade proposed a resolution nominating Mr. Ikeda for the honorary professorship, which was passed unanimously by the FIJ Board of Trustees.

FIJ had its start as a nursing school training nurses to work in neighboring countries facing shortages in the field, as well as offering correspondence courses for youth and the elderly. Today, FIJ has eight faculties: Business; Accounting; Tourism; Nursing; Physical Education; Information Systems; Environmental Management and Technology; and Information Analytics Development and Technology.

In a citation, Vice Director Mafra Trindade referred to Mr. Ikeda’s many connections with Brazil, beginning with his published dialogues with Brazilian human rights activist and writer Austregésilo de Athayde and Brazilian astronomer Ronaldo Rogério de Freitas Mourão, as well as his appointment as a non-resident member of the prestigious Brazilian Academy of Letters. She concurred with Mr. Ikeda’s assessment that, “It is vital that new morals and educational principles be established for the twenty-first century—principles for global citizenship that have a universal application, transcending national and ethnic boundaries—firmly rooted in the philosophy of respect for life.”

In a message, Mr. Ikeda conveyed his appreciation for the accolade, which he dedicated to the members of SGI-Brazil and, in particular, to the women who have surmounted countless adversities to open the door to happiness through the philosophy of human revolution. Citing FIJ’s motto, “Create value and expand abilities,” Mr. Ikeda said he hoped to explore together the means to create enhanced value for oneself and others, informed by FIJ’s tradition and history. He reviewed the college’s history from its beginnings as a small school founded by Stella Matutina Schiavo and Jésus Mafra Trindade, parents of the FIJ Director and Vice Director, originally catering to children of single parents who were considered social outcasts and whose achievements were undervalued, providing them an enriched, comprehensive education. Surmounting setbacks during the rise of the military regime, the founders expanded and developed the school into the present institution of higher learning.

Mr. Ikeda said he was in awe of the all-embracing love and compassion the founders had for their students and their conviction in their boundless abilities, regardless of social background. He asserted that by giving full play to their unique diversity, people can dramatically transform their own lives, society at large and even the era, and that the key to enabling them to do so is the courage to continue believing in others’ innate potential. He stated his hope to contribute to the institute as a new member of FIJ and discover together a fresh creative force for building a flourishing and harmonious global community. 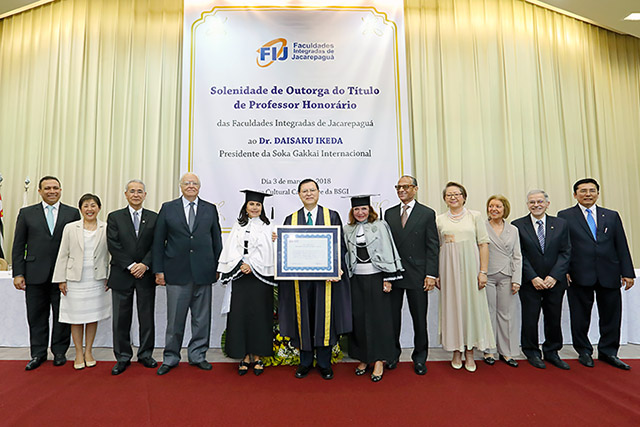 Commemorative photo-taking at the conferral ceremony for the honorary professorship from Integrated College of Jacarepaguá. SGI Vice President Hiromasa Ikeda (6th from left, holding the certificate), attending on behalf of his father, is flanked on the left by Director Maria da Glória Schiavo Mafra Trindade and on the right, by Vice Director Margarida Maria Schiavo Mafra Trindade.

[Adapted from an article in the March 7, 2018, issue of the Seikyo Shimbun, Soka Gakkai, Japan]