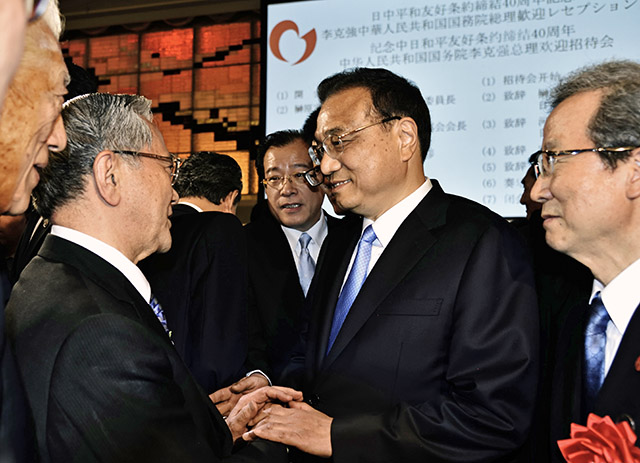 Soka Gakkai President Minoru Harada was invited to meet with Chinese Premier Li Keqiang during a reception held in Tokyo on May 10, 2018, celebrating the 40th anniversary of the signing of the Peace and Friendship Treaty between China and Japan. Mr. Harada pledged to continue efforts to strengthen China-Japan friendship and cultural exchange initiated by Mr. Daisaku Ikeda when he was president of Soka Gakkai, beginning with a proposal in the late 60s for the normalization of Japan-China relations.

Premier Li expressed appreciation for a Chinese poem he received from Mr. Ikeda earlier, which had been penned as a token of their friendship. Mr. Ikeda met Premier Li in 1985 when the Chinese leader had visited Japan as a deputy leader of an All-China-Youth Federation (ACYF) delegation. On that occasion, the ACYF and the Soka Gakkai Youth Division signed an exchange protocol. Since then, for over 30 years, the two youth groups have held regular two-way exchanges, aiming to build mutual understanding and strengthen friendship.

(In appreciation for the poem he received from Mr. Ikeda, Premier Li later presented a poem in return that expressed his hopes to further fortify the "golden bridge" of friendship that the SGI leader began building those many years ago.)

As this year marks the 40th anniversary of the Sino-Japanese Treaty of Peace and Friendship, and the 50th anniversary of a proposal calling for the normalization of relations between China and Japan made by Mr. Ikeda on September 8, 1968, Soka Gakkai plans several commemorative initiatives. 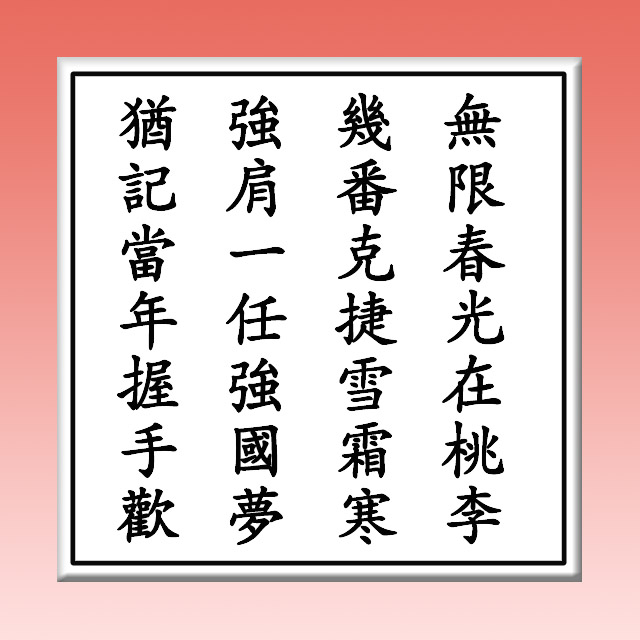 The Chinese poem Mr. Ikeda penned and presented to Chinese Premier Li as a token of their friendship

A Soka Gakkai Women’s Delegation will visit Beijing, Dalian and Xian in June, and, in October, a large-scale Soka Gakkai delegation to China will be hosted by the Chinese People’s Association for Friendship with Foreign Countries (CPAFFC).

In July, Soka Gakkai will welcome a delegation from China, with 22 ACYF representatives scheduled to visit Tokyo, Miyagi, Fukushima and Hokkaido.

On September 8, to mark the 50th anniversary of Mr. Ikeda’s proposal for the normalization of Sino-Japanese relations, the “Japan-China Forum for the New Era” will be held in Tokyo. Researchers from China and Japan will attend, and speakers will include Chinese Ambassador to Japan H.E. Cheng Yonghua and former Japanese Ambassador to China Yuji Miyamoto.

Mr. Ikeda visited China ten times between 1974 and 1997 to promote peace and friendship between China and Japan, meeting with Vice Premier Li Xiannian in June 1974 and Premier Zhou Enlai and Vice Premier Deng Xiaoping in December 1974. He also met in Tokyo with President Jiang Zemin in November 1998, Premier Wen Jiabao in April 2007 and President Hu Jintao in May 2008. He initiated numerous cultural and educational exchange programs that have continued regardless of shifts in the political climate between the two countries.