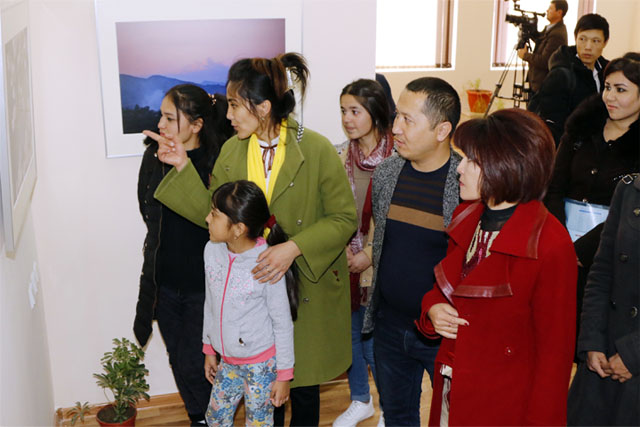 Visitors to the “Dialogue with Nature” photo exhibition in Navoiy City, Uzbekistan

On November 6, 2018, “Dialogue with Nature,” an exhibition of photographs taken by Daisaku Ikeda, opened at the Art Gallery in Navoiy City, named after the great poet and statesman Alisher Navoi (also Ali-Shir Nava’i) (1441–1501), in the Republic of Uzbekistan. The exhibition featuring 60 photographs taken by Mr. Ikeda has toured six cities in the country since November of last year, and this will be the final showing.

In ancient times, the region of Uzbekistan prospered through trade along the Silk Road and was known as the westernmost country, playing a key role in the spread of Buddhism. Navoiy City, located in southwestern Uzbekistan, is an industrial center for a region rich in mineral deposits.

Finding consonance with Alisher Navoi’s philosophy, Mr. Ikeda has shared the Uzbek poet’s words with youth on numerous occasions. In appreciation for his efforts to disseminate Uzbek literature and promote cultural and academic exchanges between the two countries, in 2004, the Uzbek government presented a bronze statue of Alishir Navoi to Soka University in Tokyo, an institute founded by Mr. Ikeda, and in 2007, Navoiy City presented him with an honorary citizenship.

Mr. Kuziev, who helped organize the tour of this exhibition, commented, “Navoi’s tremendous efforts to bring his people together and Mr. Ikeda’s spirit of compassion and tolerance completely resonate with one another. My heartfelt wish is for that spirit to spread far and wide through this exhibition.”

Mr. Ikeda sent a message to the opening stressing the importance of cultural exchanges for fostering friendship transcending differences, particularly in the present age, with the rapid spread of globalization. He conveyed his hope that by sharing the beauty of our earth, we can cultivate respect for the dignity of life in ourselves and others.

At the end of the ceremony, Mayor Bazarov conveyed his expectations for the success of the exhibitions remarking, “It is a wonderful exhibition that I would like all citizens to enjoy.”

[Adapted from an article in the November 9, 2018, issue of the Seikyo Shimbun, Soka Gakkai, Japan]