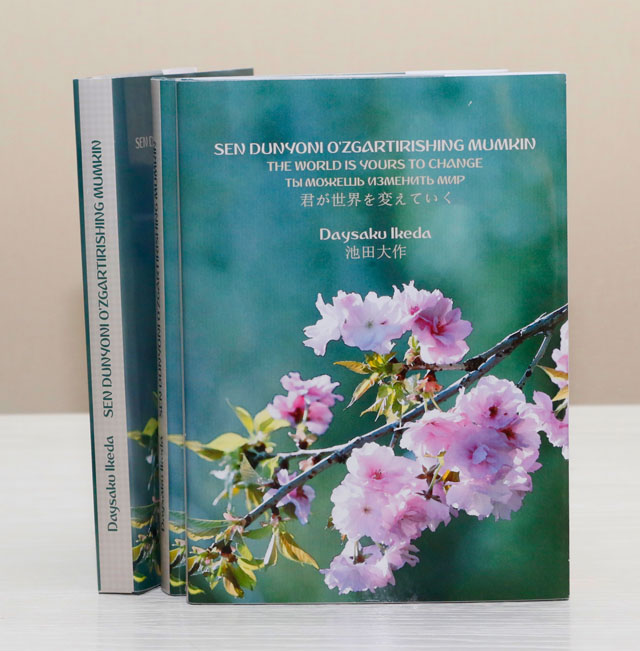 Uzbek edition of The World is Yours to Change

TASHKENT, Uzbekistan: The publishing arm of the National University of Uzbekistan released an Uzbek edition of The World Is Yours to Change, a collection of thematic essays by Mr. Ikeda. This book marks the 48th language into which his writings have been translated. First published as a textbook containing both English and Japanese in 2001, following the 9/11 terrorist attacks in the United States, it contains six essays on the philosophy of peace, inspired by Mr. Ikeda’s dialogues with leaders around the world.

In his opening remarks, Rector Marakhimov stated, “The title of this book is Mr. Ikeda’s call to the youth, encapsulating his belief that we must build a peaceful world.” He further stated that the book is a guidepost for youth on how to lead their lives.

Soka Gakkai Vice President Kenji Yoshigo read a message from Mr. Ikeda expressing his heartfelt appreciation to everyone who helped make the Uzbek edition of The World is Yours to Change possible. Mr. Ikeda stated that it would bring him great joy if his publication could further promote friendship between Japan and Uzbekistan and inspire the youth of Uzbekistan—future leaders of their country—to realize their unlimited potential.

The commemorative gathering concluded with a question and answer session with graduate students of the university.

MILAN, Italy: In spring of this year, Italian publisher Edizioni Piemme released an Italian edition of The Art of True Relations: Conversations on the Poetic Heart of Human Possibility, a dialogue between Daisaku Ikeda and Sarah Wider, professor of English and Women's Studies at Colgate University in Hamilton, New York, and former president of The Ralph Waldo Emerson Society.

The dialogue, first published in Japanese in 2013, is a collaborative endeavor between Dr. Wider and Mr. Ikeda that arose out of their meeting in Tokyo, Japan, in July 2006 and subsequent written correspondences. Focusing on “the central theme of the revival of the poetic spirit and the restoration of the power of language,” the authors explore an array of topics, including women, youth, literature, education, friendship, peace, the role of the university, as well as the philosophy of Ralph Waldo Emerson and Henry David Thoreau. Their dialogue ultimately focuses on how to build a society in which each person can manifest their potential and shine in their own unique way.

[Summary of The Art of True Relations]

[Adapted from articles in the April 6 and November 10, 2018, issues of the Seikyo Shimbun, Soka Gakkai, Japan]