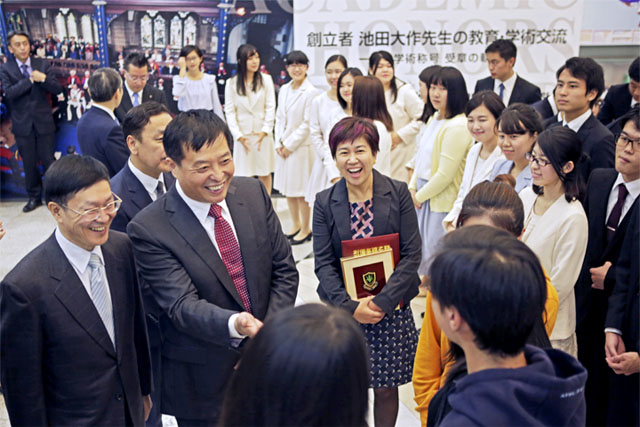 On October 23, 2018, China’s Beijing Film Academy conferred an honorary professorship upon Soka University founder and SGI President Daisaku Ikeda for inspiring young people through his stories for children and youth that have been made into animated adaptations and for his longstanding contributions to strengthening Sino-Japanese friendship through academic and educational exchanges. The conferral took place at the Soka University campus in Hachioji, Japan, and was attended by a delegation from the Beijing Film Academy, which included Li Ran, dean of the Academy’s International School and Hou Guangming, chair of the Beijing Film Academy Council. Representatives from the Chinese Embassy in Japan were also in attendance. Soka University President Yoshihisa Baba accepted the certificate of appointment on behalf of Mr. Ikeda from Dr. Hou.

Originally founded in 1950, the academy was renamed several times until it was officially established as the Beijing Film Academy in 1956. Enrolling some 3,000 students, it is currently the only film academy in China and the largest in Asia. Since the formation of the People’s Republic of China, professors and students of the film academy have been responsible for producing approximately 70 percent of the films created in China. Many notable filmmakers are among its graduates, including internationally acclaimed Chinese film director Zhang Yimou.

In a citation, Dr. Hou spoke about the significance of Mr. Ikeda’s animated children's stories that not merely entertain but convey such values as peace, friendship and conviction. The citation represents not only the deep reverence that the Academy’s professors and students have for Mr. Ikeda, he said, but also respect for his dedication to deepening understanding and strengthening ties of friendship between the people of China and Japan through academic and educational exchanges between Soka University and Chinese universities. Reflecting that this year marks the 50th anniversary of Mr. Ikeda’s proposal for the restoration of Sino-Japanese relations and the 40th anniversary of the Treaty of Peace and Friendship between Japan and China, Dr. Hou expressed his hopes for the Academy to work in tandem with Soka University to continue advancing exchanges that deepen mutual trust between the people of their countries.

In his acceptance message, Mr. Ikeda recalled his meeting with Chinese Premier Zhou Enlai and his wife, Deng Yingchao, and how Premier Zhou, who strove to advance the movie industry following the formation of the People’s Republic of China, strongly supported the founding of the Beijing Film Academy. In addition to recounting the rich history of the academy, Mr. Ikeda spoke about what he considered to be the great qualities of “art for the people”: First, it is a medium that motivates artists to surmount their own struggles toward the creation of film that inspires others. Second, it provides mentorship that encourages students to carry on the legacy of their predecessors while striving for greater heights toward the blossoming of creativity. Third, films or movies serve as a cultural bridge that can unite the hearts of people toward peace.

Mr. Ikeda also composed a poem in Chinese expressing his appreciation for the accolade, which was presented to the Beijing Film Academy.

[Adapted from an article in the October 25, 2018, issue of the Seikyo Shimbun, Soka Gakkai, Japan]