Huaiyin Normal University is located in Huai’an City, Jiangsu Province, the hometown of Chinese Premier Zhou Enlai (1898–1976), with whom Mr. Ikeda shared a friendship. The university has won numerous titles and awards for its excellence and is known for its training program for primary and secondary school teachers. There are currently some 20,000 students enrolled at the school.

In a citation, President Jiao said he believes the deep friendship between Mr. Ikeda and Premier Zhou was instrumental in the development of friendship between China and Japan as well as strengthening cultural exchanges between the two countries and promoting world peace. Expressing appreciation for Mr. Ikeda’s longstanding dedication to advancing friendship between the two countries and welcoming him to the faculty as an honorary professor, Dr. Jiao conveyed his hope that Soka University and Huaiyin Normal University would continue working together to create a new history of cultural exchanges.

In an acceptance message, Mr. Ikeda expressed his deep appreciation for the honor and reminisced about visiting Premier Zhou at a hospital in Beijing in December 1974, where the Premier was being treated for a terminal illness. The Premier had expressly urged that they continue working together to advance Sino-Japanese friendship, a matter close to both their hearts, and expressed his desire for the earliest conclusion of the Peace and Friendship Treaty for the sake of the future.

Noting that the Chinese university has continued to develop first-rate individuals, Mr. Ikeda reflected on three essential principles the institution has upheld in keeping with Premier Zhou’s legacy, as follows. First is the spirit of appreciation—of repaying one’s debts of gratitude—an awareness that, he said, unlocks infinite potential of an individual. Second is to always reflect on the underlying purpose and motivation for one’s actions and engagement. Such an attitude empowers one’s progress in study. Third is to develop the spirit of global citizenship, which he described as the wellspring of peace, while remaining rooted in one’s local community.

In conclusion, Mr. Ikeda stated his commitment to working together with other faculty members for the sake of society, raising youth and promoting educational exchanges in keeping with Premier Zhou’s aspirations for the university. 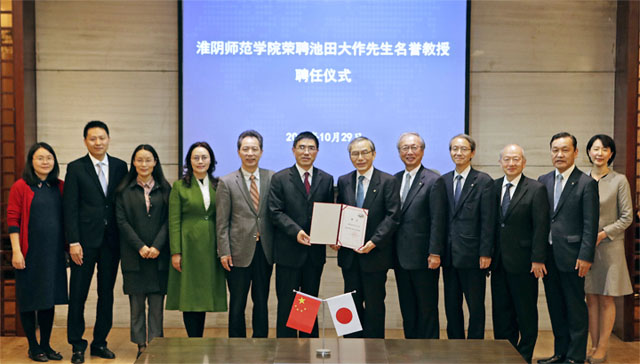 [Adapted from articles in the November 1, 2018, issue of the Seikyo Shimbun, Soka Gakkai, Japan]