The conferral, which took place on October 31, 2018, at the SGI-Argentina Peace Hall in Buenos Aires, was attended by UDE Rector María de las Mercedes Reitano, a professor of art history, who also serves as a director of the Latin American Contemporary Art Museum (MACLA) in La Plata. SGI Vice President Hiromasa Ikeda accepted the award on his father’s behalf.

Located in the capital city of Buenos Aires Province, the university began in 1991 as an institution of higher education focusing on science and received provisional university status in September 2008. The institution officially opened as University of Este in June 2010 and this year reached its 10-year milestone as a university, which today has four faculties—economics, humanities, law and social sciences, and design and communication. The conferral of the honorary degree was approved by the UDE Board of Trustees who identified with Mr. Ikeda’s ideals and his broad-minded efforts to connect people, offering ideas for resolutions to issues afflicting humanity and contributing to global peacebuilding.

In a citation, Rector Reitano shared her thoughts on the mission of a university as being the ceaseless sharing of universal ideals. Stating that education is vital to eradicating poverty, building peace and providing equal opportunity for learning, she affirmed that Mr. Ikeda continues to inspire people to greater heights through his philosophy of value creation. Through his words of hope, he encourages people to persevere in a complex society, she said, as well as fostering capable individuals based on humanistic ideals. Rector Reitano expressed her resolve to work alongside Mr. Ikeda in the same spirit to train people of competence who contribute to society.

In an acceptance speech read by proxy, Mr. Ikeda expressed his heartfelt appreciation for the accolade and his desire to dedicate the honor to the members of SGI-Argentina who have served their communities as model citizens.

Describing the need for educational institutions to foster global-minded citizens, Mr. Ikeda suggests three guideposts for this endeavor: First is the development of individuals of sound character and creativity who work for the sake of ordinary people and contribute to the local and global community. In this regard, he said he found consonance in the Argentine university’s lofty vision of education for the holistic development of students.

Second is building a firm solidarity of such capable individuals. Mr. Ikeda commended UDE on its stated mission of nurturing relationships founded on respect, solidarity, sympathetic insight, social responsibility, mutual understanding and mutual inspiration. This resonates deeply with the philosophy of Soka education, he said, commenting that just as it takes a diamond to polish a diamond, a person’s life shines through interactions with others. It is through such exchanges within global society that individuals can cultivate rich character and manifest great potential.

The third guidepost is encouraging youth to develop resilience and hope in order to surmount adversity. This, he said was the crux of the recent joint appeal he and Nobel Peace Prize Laureate Adolfo Pérez Esquivel had made to young people worldwide, calling on them to help build a world founded on justice and solidarity. 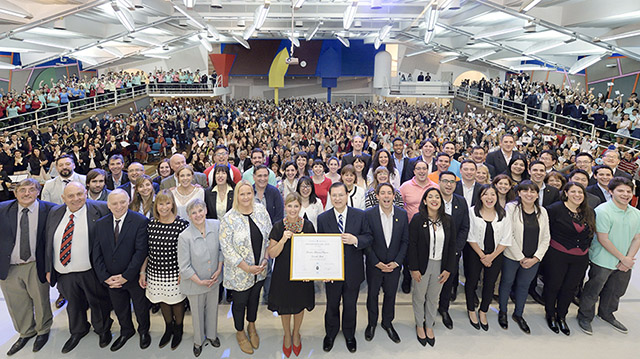 [Adapted from an article in the November 4, 2018, issue of the Seikyo Shimbun, Soka Gakkai, Japan]