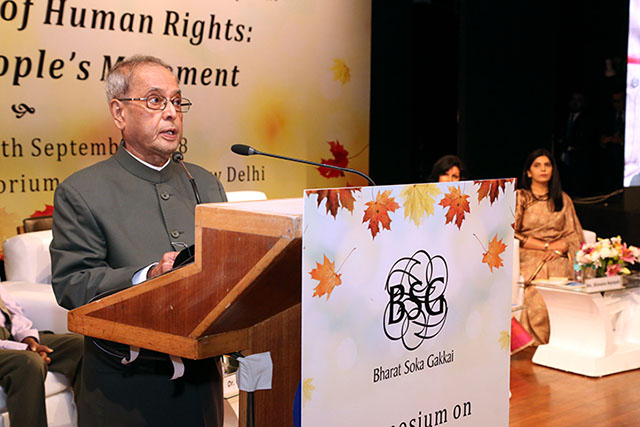 From April through September 2018, Bharat Soka Gakkai (BSG) held a series of five peace symposiums in cities across India focused on SGI President Daisaku Ikeda’s 2018 Peace Proposal. The last of these was held in New Delhi on September 26 with former Indian president Pranab Mukherjee as the keynote speaker.

For former president Mukherjee, two key interwoven themes were human rights and what second Soka Gakkai President Josei Toda called “global nationalism”—an identity rooted in global awareness and concern. These could be said to form the basis for creating a world in which none, regardless of nationality or background, would find their rights and interests trampled. "Compassion and empathy is the true foundation of our civilization, but every day we see increasing violence surround us," Mr. Mukherjee noted, addressing an audience of some 500 people. "At the heart of this violence is darkness, fear and mistrust." We must, he said, “free our public discourse from all forms of violence—physical as well as verbal.” 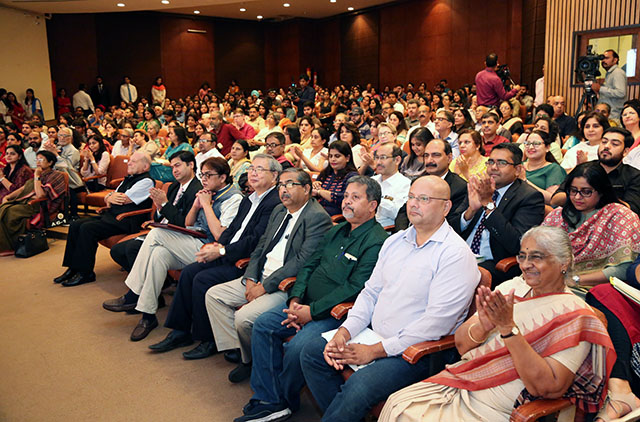 Participants at the symposium in New Delhi

“What struck a deep chord with me,” said Mr. Mukherjee, “is a statement of Ikeda that ‘Being able to contribute in some way to the happiness of others and the world, be it through work or in some other capacity, brings one joy and fulfillment in life.’” In this vein, the former president called on the youth to unite and become the “voice of change” to create a global society in which “no one is left behind.” There is, he pointed out, an important distinction to be made between a concern with being “world class” and being “world-minded.”

Both Dr. Mathew and Ms. Narayan were drawn to Mr. Ikeda’s comments on women’s empowerment, which the SGI president characterized as the key to solving global problems. Mr. Mathew referenced also an article by Mr. Ikeda on the same theme published in The Times of India that day.

Ms. Narayan noted that the development of the SGI was an indication “that the message of peace, the inner core of this movement, has struck a chord in so many hearts,” within an environment of pervasive conflict. She echoed Mr. Ikeda’s sentiment in the proposal that “there is no greater treasure than the highest human qualities of compassion courage and hope.”

[Adapted from an article in the October 11, 2018, issue of the Seikyo Shimbun, Soka Gakkai, Japan]