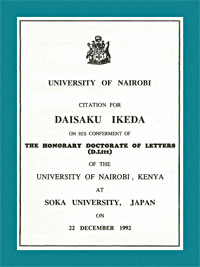 Daisaku Ikeda has lived a life dedicated to the promotion of peace, culture and education. The peace which Ikeda has done so much to promote is not just the absence of war; he has worked for a "human revolution." Having observed that the nineteenth and twentieth centuries have been characterized by overdependence on rationalism, pragmatism and practical politics, Ikeda has taken every opportunity and used every facility available to him to advocate and propagate the need for the improvement of society that starts from within the individual. In one of his many proposals for peace, delivered . . . in 1972, he said: "The individual requires a firm basis enabling him to advance with the strength of his beliefs, even when he is completely alone." The peace that Ikeda has challenged the world and mankind to work for starts with stabilizing one's inner thoughts and philosophy. Daisaku Ikeda's contribution to world peace emanates from the Buddhist convictions that there is in human life the inherent ability to find creative resolutions for conflicts and to create value in the process.

His philosophy for life sees culture as a barometer for peace in the individual and society. He sees culture as both the expression and the fortification of the power of life in human beings with its unique ability to create meaning and values in life activities. Within this mode of thought a system of education is required which is focused on the enhancement of the ability of the individual and society to create value. Education is therefore a key issue in the establishment of peace that starts with the individual in Ikeda's philosophy.

Daisaku Ikeda is thus a philosopher who has concerned himself with serious issues which threaten human society and mankind in his time. Apart from his three major concerns of peace, culture and education, Ikeda has tackled issues like nuclear disarmament and environmental destruction, the East-West and North-South polarization, the Cold War, cultural pluralism, global unity of mankind, women and gender issues in development, and youth as the most critical investment for the future of mankind. As a philosopher in fact, Ikeda has provided the world with a model for the establishment of peace. It is a model calling for a second Renaissance. Based on Buddhism, the model starts with individual spiritual renewal . . . to provide the necessary guidance and control. In this, Ikeda seeks to improve on today's disparity between mankind's technological advancement and his ethical retardation. The model requires the individual to be happily nestled in a society with an established culture that is accepted and acceptable to provide everyone with all they need to know how to behave well and judge good from bad. In the model, education must be designed to equip the individual with what he needs to play his role effectively. In the model, the individual so prepared transforms his own life from within, and then proceeds as an ordinary human being to play a leading role, in the battle to achieve permanent world peace.

Though a philosopher, Daisaku Ikeda has not remained a dreamer. He has distinguished himself as a practical man who has taken the challenge of his ideas and has given exemplary lead in pursuing them. Practically, he has done a great deal to put his model to test in his own actions: he has lived demonstrating how each of us can, and must, make our own commitment to world peace, and that our commitment makes a difference . . .

Reading through Daisaku Ikeda's printed works whether proposals, dialogues, fiction or biographies, gives a refreshing feeling of a breeze through a window for mankind's survival. It is reading the words and messages of an intellectual who is very simple because he is so profound. These are quiet words of a natural genius spending his life away infecting the world with seeds of a quiet revolution. Reading Daisaku Ikeda's curriculum vitae is a humbling experience for a schooled academic.

Daisaku Ikeda is a man difficult to summarize: He is a philosopher cum sociologist par excellence; he is a practical man of ceaseless energy. He is an educator, an author, a poet, and a literary critic; he is a man committed to advancing peace in the world--peace which is based on those qualities that mankind most require to survive. He is a man of great convictions on matters as religious as they are human. This man must surely be the Relevant Intellectual who has discovered with Rudyard Kipling (1865-1936) that "Words are the most powerful drug used by mankind." His published works, both fiction and nonfiction, poetry and prose, are literally innumerable.

Ikeda is a remarkable man of purpose, a first class intellectual and international sage, who has recognized and offered the world his gift of letters in a rationalized and determined attempt to live to leave the world a better place than he found it.

To give Daisaku Ikeda an Honorary Doctorate of Letters is simply to give recognition to a man already acknowledged in his own lifetime. This is why it is such a great honour for the University of Nairobi today to add to the glowing international tribute to Ikeda by conferring on him the honorary degree of Doctor of Letters.