Kenneth D. Kaunda—:First President of the Republic of Zambia

President Kaunda, the father of Zambian independence, refuses to eat meat. He described the experience that led him to make that choice:

"I can still see clearly in my mind that day when I watched a group of poor African women being manhandled outside a white-owned butcher's shop because they were protesting against the quality and price of the rotten meat he was trying to foist off on them. I swore then never to eat anything my poorest fellow Africans could not afford." 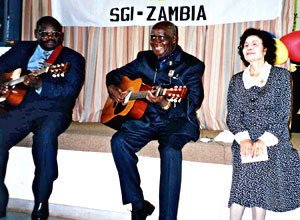 Dr. Kaunda is the youngest of eight children. His father died when he was eight years old. His mother was a teacher--a rare profession for Zambian women in those days. Though they were poor, she was able to save enough money to allow him to attend school. He reminisces:

"Education cost the princely sum of two shillings and sixpence a year--barely more than the price of a bottle of beer today--but how many children of promise and intelligence were doomed to wasted lives because that single coin was beyond their parents' means?"

The colonial government made very little investment in education or medical care for the people. As a result, when independence came after 70 years of British rule, less than 100 of the indigenous population had a university education.

Countless mothers, determined to send their children to school, worked from dawn to dusk at extra jobs, taking in laundry and performing other menial tasks. But even those who were able to receive an education faced prejudice and discrimination.

President Kaunda recalls an incident that took place when he was working as a teacher. At that time, Africans were not allowed to enter European-owned shops from the front door. They had to stand at a window at the side of the shop and ask for what they wanted. They had no chance to see or choose what they were buying. He recalls:

"I went inside and asked politely for a book . . . Pointing to the door, [the proprietor] said viciously, 'Get out of here.' I said again, 'I am only asking for a book and I can get it nowhere else in town.' He said, 'You can stand there till Christmas and you'll never get a book from me.'"

Dr. Kaunda was thrown out. Depersonalizing experiences such as these transformed him into a warrior for independence.

For four centuries, starting in the 16th century, Africa has been the object of violence, first through the slave trade and then under the colonial administrations of various European nations that followed. When the Industrial Revolution took place, the need for slaves rapidly diminished. It became more profitable to put the Africans to work in Africa, and to make money by selling European goods to them. The remarkable global expansion and economic growth of Europe, including the Industrial Revolution, were built on the exploitation of Africa and other lands, the violence justified by lies and racist propaganda.

Dr. Kaunda began working for the independence movement as a young man of 25. He traveled throughout the country on a bicycle, a guitar slung over his shoulder. Singing "freedom songs" of his own composition, he helped organize the liberation movement. Since few could read or write, this was a particularly effective method of spreading his message.

Zambia--the former Northern Rhodesia--suddenly attracted attention when a large copper belt was discovered there in the 1920s, shortly after Dr. Kaunda was born. The world's copper needs were expanding, and colonial powers rushed into the region. They seized all the best land and taxed the people, who had to pay in cash. In order to get that cash, they had to work in the mines. The wages were low and the work was hard, but they had no other choice. Until the European colonizers came, the people had been self-sufficient, but with all the men working in the mines, the fields were deserted. Landowners forced every available agricultural worker to grow cash crops for export. Widespread famines occurred.

The young Dr. Kaunda thought long and hard about the best way to achieve independence. How could one resist authorities, he wondered, who shot workers simply for going on strike? The biggest problem for him was his belief that, as a Christian, he could not harm other human beings; yet how could the country's liberation be won without hurting anyone? He felt caught between his humanitarian principles and the practicalities of political action.

It was the philosophy of Mahatma Gandhi, shining "like gems in a river of mud," that came to the youthful Dr. Kaunda's rescue. He felt as if light had pierced a dark forest. Dr. Kaunda had found the answer to his problem:

"Our main armament was not guns but words--thousands and thousands of words, written and spoken to rally our people, to lay our claims before the British Government and the world, to express our anger and frustration at the denial of our birthright to rule our own country."

He formed the Zambia African National Congress. It was immediately outlawed, and he was imprisoned for nine months. Yet through all this, by means of letters from prison, he continued to rally his fellow independence fighters:

"They have banned the great name of Zambia, but the greater name of freedom now is spiritual. It is beyond their reach and so they cannot ban it . . . Africa, our mother Africa, must be free, and it has fallen to our lot to free this part. Be of good cheer, we are just beginning."

After being released from prison, Dr. Kaunda became the head of the new United National Independence Party and publicly announced its official policy of Gandhian nonviolence. He advocated ceaseless dialogue, and insisted that the words of that dialogue be crystal clear, because: "Words are power. Inarticulateness is impotence." 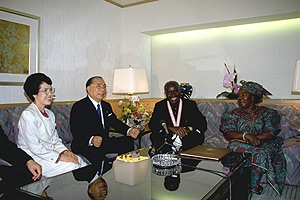 Daisaku and Kaneko Ikeda meeting with Dr. and Mrs. Kaunda in Tokyo (November 12, 1990)

Using his linguistic skill to appeal to public opinion in Britain and the rest of the world, Dr. Kaunda won independence for his nation without resorting to violence. As he later wrote: "Had we acted on the basis of a blow for a blow, the history of the last days of Northern Rhodesia and the first days of Zambia would have been written in blood."

The excitement of the people gathered in Independence Stadium in the Zambian capital city of Lusaka on October 23, 1964, rose up into the night sky. The electricity was off. One minute before midnight, a fanfare sounded and spotlights illuminated the new flag of the Republic of Zambia. At last, the people had their own country and their own flag! As the national anthem was played, the flag was slowly raised.

Zambia's independence came to the world's attention during the Tokyo Olympics, when the country's name changed between opening and closing ceremonies. Its athletes marched in the opening ceremony under the banner of Northern Rhodesia, but at the Games' closing ceremony, they marched proudly under the new banner of the Republic of Zambia, to the enthusiastic applause of the spectators and the world.

The new President Kaunda worked hard, as much as 18 to 20 hours a day. He advocated humanism as the national philosophy, proposing universal education and health care. Copper prices remained high, and the country's economy was strong. But in the 1970s, world copper prices collapsed, causing a financial crisis. The socialist policy of nationalizing major industries was not proving a success, and the nation's economy was threatened.

In spite of this, President Kaunda and the Zambian people continued to aid the struggle for freedom in other nations of southern Africa--white-ruled South Africa, Rhodesia (present-day Zimbabwe) and Southwest Africa (present-day Namibia).

The price for this struggle for freedom was high. In retaliation, the white ruling elites closed their nations' borders, not even allowing rail traffic out of Zambia. The resulting rise in the cost of exporting goods was a life-or-death issue for the landlocked nation. The same governments encouraged plots to "topple Kaunda" and waged a campaign to discourage foreign investment in the country.

But the people of Zambia endured all this and continued to accept refugees from their neighbors, until asylum seekers accounted for two percent of the nation's population.

Peace is humanity's most pressing priority. Even after his retirement from the political scene, Dr. Kaunda has continued to speak out against the domination of the weak by the strong throughout the world. He urges that we look at the world through the eyes of the poorest nations and the people with the fewest advantages. And still today, Dr. Kaunda continues to fight on the front lines of the nonviolent struggle for peace.