Meeting with Nelson Mandela shortly after his release from prison (Tokyo, October 1990)

(Abridged essay from One by One by Daisaku Ikeda, a collection of essays in which he reflects on his encounters with various world figures, scholars and activists who have inspired him.)

He was brimming with confidence when I greeted him in Tokyo on a July afternoon in 1995. It was our second meeting, and also a little over a year since he had been elected president of South Africa.

The "dangerous criminal" who had been imprisoned for 27 years for high treason had emerged from that prison to become president of his country. Justice, which had been locked away for so many decades, had finally begun to reign again in South Africa.

As Mandela has commented, "South Africa's prisons were intended to cripple us so that we should never again have the strength and courage to pursue our ideals."

The prisoners were awakened before dawn to start a long day of forced labor. For 13 years Mandela was led in chains to a limestone quarry and forced to extract lime from the hard cliffs beneath a burning sun.

Even under these hellish conditions, Mandela managed to study and encouraged the other prisoners to share their knowledge with each other and to debate their ideas. Lectures were arranged in secrecy and the prison came to be known as "Mandela University." Mandela never relented in his efforts to change mistaken views and create allies among those around him. Eventually, his indomitable spirit gained the respect of even the prison guards.

By far the cruelest torment he had to endure was his inability to aid his family or shield them from the incessant persecution of the authorities. The Mandela home was attacked and burned; his wife was repeatedly harassed, arrested and interrogated. Mandela was in prison when he learned that his mother had died of a heart attack. It filled him with immense pain to think that she died still worrying about his safety, as she had throughout the long years of his struggle for freedom and dignity. Shortly thereafter, he was told that his eldest son had been killed in a highly suspect automobile "accident."

Yet throughout it all, he refused to abandon hope. In 1978, 16 years into his imprisonment, he was permitted to have a direct meeting with his daughter Zeni, who brought her newborn child with her to the prison. The last time Mandela had hugged his daughter she had been as small as the infant accompanying her that day. Throughout their visit, he held his granddaughter in his arms. He later wrote: "To hold a newborn baby, so soft and vulnerable, in my rough hands, hands that had for too long only held picks and shovels, was a profound joy. I don't think a man was ever happier to hold a baby than I was that day."

Zeni asked him to name the child. Looking at his granddaughter, he thought of the future and how, when she was grown, apartheid would be a distant memory. He thought of her and her generation walking proudly and fearlessly under the sun of freedom; of a country where all people would live in equality and harmony. With these thoughts swirling through his mind, he named the tiny baby Zaziwe, "Hope." 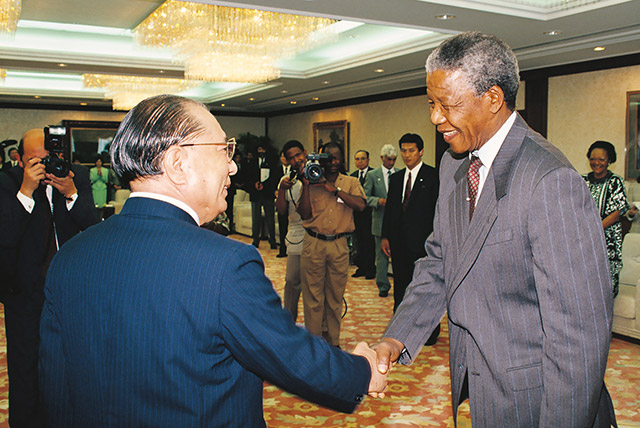 When President Mandela and I first met in 1990, I suggested organizing a series of programs to inform the Japanese public about the realities of apartheid and to promote education in South Africa. President Mandela accepted my proposals with genuine joy. His secretary, Ismail Meer, said that this offer of cultural exchange was a welcome recognition of Africans as human beings. This is what had been denied them in South Africa, where they were simply classified as "black."

The tendency to label people is not unique to South Africa. Prejudiced attitudes are at the root of human rights abuses everywhere. By lumping people into categories, we stop recognizing them as individuals, as our fellow human beings; we are no longer able to put ourselves in their shoes. They are there in front of us, but we do not see them.

An unwillingness to recognize the humanity of the people of Africa is literally inscribed on the map of modern Africa; its arbitrary, divisive borders decided by colonial powers. Africa is not a "Dark Continent." The darkness was brought from without. Nor is Africa a poor continent. It was made poor by rapacious exploitation. During the Cold War, Africa became a stage for the proxy wars of the Eastern and Western blocs, and the weapons brokers of major powers grew rich as a result. And what did the rest of the world have to say to the African people who had endured so much? They called Africa a "failure." What indescribable arrogance!

"The struggle is my life." True to this conviction, in 1962 Mandela transformed even the courtroom in which he was being tried into a battleground of courageously articulated ideals and eloquent appeals for justice. Standing before the judge, he demanded that the right to vote be extended to all South Africans. He declared, "I consider myself neither legally nor morally bound to obey laws made by a parliament in which I have no representation."

From within his prison cell, Mandela continued to inspire the people of South Africa. Although he was unable to communicate with them, his very existence was a source of hope.

The world registered its disgust for apartheid and its support for those resisting it through economic sanctions and cultural and sports boycotts. Feeling this pressure, the South African government held out the offer of early release to Mandela on several occasions. He consistently refused these offers, which would have compromised the integrity of the antiapartheid movement. He refused to consider his own freedom before that of the whole country had been achieved. In his eyes, all of South Africa was a prison. 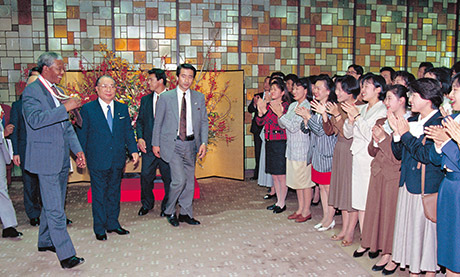 At last, the day of his release arrived. On that day, February 11, 1990, Mandela addressed a rally in Cape Town:

"I stand here before you, not as a prophet, but as a humble servant of you, the people. Your tireless and heroic sacrifices have made it possible for me to be here today. I therefore place the remaining years of my life in your hands."

Mandela dreams of a land ruled neither by blacks nor whites, but rather, of a "rainbow nation" in which all people enjoy equal treatment. He once said, "It is an ideal which I hope to live for and to achieve. But, if needs be, it is an ideal for which I am prepared to die."

"They Are with Me"

South Africa's first nonracial elections, open to all citizens, were held in April 1994. As Nelson Mandela walked to the voting booth, the faces of all those who had died on the journey to that moment appeared in his mind. Men, women and children, they had given their lives so that he and his fellow South Africans could be where they were that day.

The most profound philosophies are born in those who have endured the most severe oppression. In Mandela's own words:

"It was during those long and lonely years that my hunger for the freedom of my own people became a hunger for the freedom of all people, white and black. I knew as well as I knew anything that the oppressor must be liberated just as surely as the oppressed. A man who takes away another man's freedom is a prisoner of hatred; he is locked behind the bars of prejudice and narrow-mindedness . . . The oppressed and the oppressor alike are robbed of their humanity."

No one can better teach us the deepest meaning of freedom than this man who spent half his adult life imprisoned. The essence of freedom is found in immovable conviction. Only those who live true to their convictions, whose inner faith enables them to rise above the fetters of any situation, are truly free. As President Mandela has said: "To be free is not merely to cast off one's chains, but to live in a way that respects and enhances the freedom of others."

The struggle President Mandela waged to bring apartheid to an end is really a struggle for the very soul of human dignity. I feel that he took up this struggle as the representative of the entire human race.