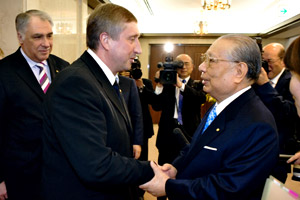 TOKYO, Japan: Publisher Daisanbunmei-sha has published Heiwa no ashita e kyoiku no taiko--ukuraina to nihon no yujo (working title: The Great Light of Education toward the Dawn of Peace: Ukraine-Japan Friendship), a dialogue between National Technical University of Ukraine (NTUU) Rector Dr. Michael Z. Zgurovsky and Daisaku Ikeda. The work was originally serialized in the monthly education magazine Todai from May 2008 to November 2009. In their dialogue, the authors discuss ways in which war and violence may be transformed into a global culture of peace and site education and dialogue as the most tangible tools in facilitating this transformation.

Dr. Zgurovsky is an acknowledged authority on mathematics and cybernetics, the interdisciplinary study of the structure of complex systems, and has published over 20 books on this subject. Following Ukrainian independence in 1991, he became rector of NTUU in 1992 and served as Minister of Education of Ukraine from 1994 to 1999. Dr. Zgurovsky met Mr. Ikeda in Tokyo in April 2006 when, as a representative of NTUU, he was visiting Japan to confer an honorary doctorate on Mr. Ikeda. The idea of publishing a dialogue grew out of their discussions at that time.

The dialogue was nearing the final stages of production when the Great East Japan Earthquake struck on March 11, 2011. To express their sympathies and support for the victims of the earthquake, Dr. Zgurovsky and Mr. Ikeda added a joint postscript. In the postscript they state their absolute confidence in Japan's ability to recover from the disaster, just as Ukraine prevailed over the Chernobyl accident and Japan overcame the atomic bombings of Hiroshima and Nagasaki and succeeded in rebuilding the country after World War II. They also advocate the total abolition of nuclear weapons.

[Adapted from an article in the April 24, 2011, issue of the Seikyo Shimbun, Soka Gakkai, Japan]