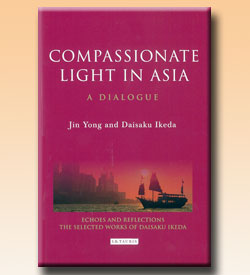 LONDON, UK: Publisher I.B. Tauris has released two dialogues in English, Compassionate Light in Asia: A Dialogue and José Martí, Cuban Apostle: A Dialogue, both co-authored by Daisaku Ikeda. These two books are the ninth and tenth dialogues published by I.B. Tauris as part of the 12-volume series, "Echoes and Reflections," which is comprised of a selection of dialogues that Mr. Ikeda has published with leaders and scholars from around the world.

In Compassionate Light in Asia, Mr. Ikeda and Jin Yong, a renowned contemporary Chinese writer, discuss a wide range of themes including the nature of friendship, the Buddhist perspective on life and death, and the spiritual search for truth. Demonstrating a remarkable capacity for empathy throughout their dialogue, both authors embody an intelligent and sympathetic compassion that represents a beacon of hope for the future direction of Sino-Japanese relations.

Mr. Jin and Mr. Ikeda have met on five occasions, the first on November 16, 1995, at the author's home in Hong Kong. The dialogue was initially serialized in Ushio, a Japanese literary magazine, and Hong Kong's Ming Pao Monthly, during 1997. The Japanese edition of their dialogue was compiled and published as a book in April 1998, and traditional Chinese editions were published soon after, in Hong Kong in August 1998, and in Taiwan in December 1998. A simplified Chinese edition was published by Peking University Press in China, also in December of the same year. 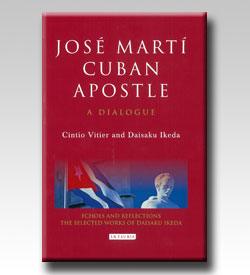 In José Martí, Cuban Apostle, Ikeda and Cintio Vitier (1921-2009), founding president of the Center for the Studies of José Martí, explore the life, work and influence of José Martí (1853-1895) the Cuban independence hero, and discuss the nature of sacrifice for the sake of a great cause.

Mr. Vitier, a celebrated Cuban poet and essayist, and Mr. Ikeda have met on two occasions, once in Havana, Cuba, and once in Tokyo, Japan. The dialogue was initially serialized in Ushio, a Japanese literary magazine, from June 1999 to April 2000. The Japanese edition of their discussions was compiled and published as a book in August 2001, and Diálogo sobre José Martí, el Apóstol de Cuba, the Spanish edition, was published in Cuba in October 2001 and in the Dominican Republic in May 2002.

[Adapted from an article in the October 27, 2013, issue of the Seikyo Shimbun, Soka Gakkai, Japan]