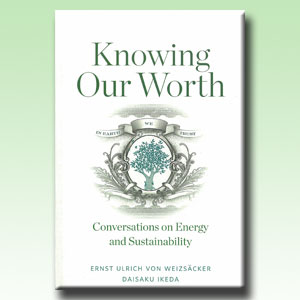 CAMBRIDGE, USA: Knowing Our Worth: Conversations on Energy and Sustainability, an English edition of a dialogue between German environmentalist Dr. Ernst Ulrich von Weizsäcker and Daisaku Ikeda, has been released in softcover by Dialogue Path Press, the publishing arm of the Ikeda Center for Peace, Learning, and Dialogue, based in Cambridge, Massachusetts, USA. A hardbound Japanese edition was published by the Ushio Publishing Co. in October 2014. Their dialogue on building a sustainable global society was originally serialized in Ushio, a monthly Japanese literary magazine, and in the Japanese edition of The Journal of Oriental Studies, a biannual journal of the Institute of Oriental Philosophy (IOP), in eight installments from December 2011 to May 2014. The dialogue has been reedited for the book, which also includes new material.

Dr. Weizsäcker is a foremost authority on global environmental policy and serves as co-president of the Club of Rome. Mr. Ikeda, who is an honorary member of this acclaimed global think tank based in Rome, Italy, has also published dialogues with founder and first president Aurelio Peccei and honorary president Ricardo Diez-Hochleitner.

Throughout the dialogue, Dr. Weizsäcker and Mr. Ikeda share common concerns for building a sustainable future through transitioning to clean, efficient and renewable energy sources. They concur that understanding the concept of human revolution—a self-directed process of positive inner change which leads to transformation of one's environment—is crucial to overcoming global issues and rejuvenating society.

Dr. Weizsäcker and Mr. Ikeda first met in March 2010 on the campus of Soka University in Hachioji, Tokyo. The idea of collaborating on a dialogue grew out of discussions they held at that time and was continued through written correspondence.

[Adapted from an article in the May 1, 2016, issue of the Seikyo Shimbun, Soka Gakkai, Japan]