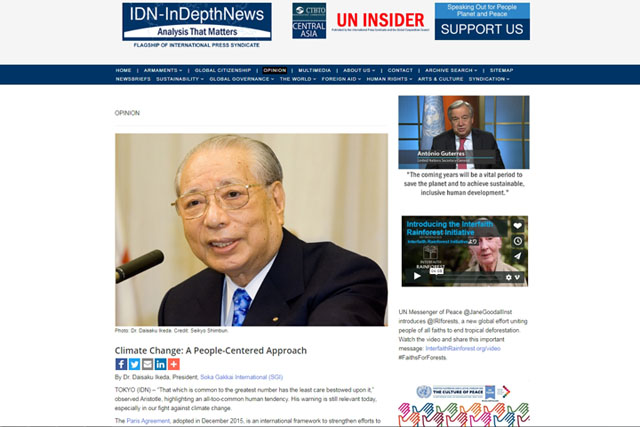 On September 19, 2019, the online news site In-Depth News published an opinion editorial by SGI President Daisaku Ikeda titled “Climate Change: A People-Centered Approach.” The editorial was published ahead of the September 23 United Nations Climate Action Summit in New York and the first ever UN Youth Climate Summit, at a time when global attention is sharply focused on growing climate crisis and the urgent need to reduce carbon emissions. The world, Mr. Ikeda acknowledges, is at a crucial crossroads, with the very survival of humanity at threat.

Climate change has already begun to wreak devastating effects on local and national economies. But comparatively little attention has been focused on the less quantifiable consequences of its disruptions. In this regard, Mr. Ikeda draws attention to research carried out by the Toda Peace Institute, which he founded in 1996, highlighting the plight of Pacific Islanders who face the threat of forced migration due to raising sea levels. The emotional and spiritual impacts on such communities of being forced to leave their ancestral lands—which could be likened to losing one’s fundamental identity—may be easily overlooked if we focus simply on the economic costs.

He emphasizes that in developing responses to climate change the needs and perspectives of those most vulnerable to global warming and to various forms of structural discrimination need to be taken into account. Mr. Ikeda calls on government heads to strengthen collaborative action to tackle global warming. The possibility of opening the way to building a sustainable global society, he asserts, rests on our ability to follow the lead of youth in engaging people to take action.

IDN is the flagship agency of the International Press Syndicate.

[Adapted from an article in the September 20, 2019, issue of the Seikyo Shimbun, Soka Gakkai, Japan]