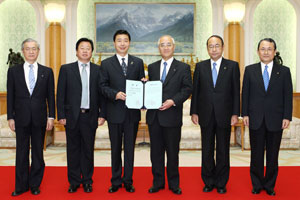 In his conferral speech, Professor Wang recognized Mr. Ikeda as one of the first Japanese to propose the normalization of Sino-Japanese bilateral relations. He commended Mr. Ikeda for his farsighted contributions to peace through the promotion of cultural and educational exchanges with countries around the world. He commented that Soka University was one of the first Japanese institutions of higher learning to receive Chinese exchange students. Professor Wang also stated that Mr. Ikeda's writings on education, society, philosophy and religion are widely read in China and have had an extensive influence there.

In a message, Mr. Ikeda expressed his heartfelt appreciation for the honorary degree from Hebei University. Commenting that the Tokyo Fuji Art Museum, of which he is the founder, will soon be sponsoring a special exhibition on the Chinese classical historical epic The Romance of the Three Kingdoms, Mr. Ikeda noted Baoding, where the Chinese university is located, is the birthplace of Liu Bei, a hero of the novel. Baoding, he continued, is also the setting for a scroll painting of the legendary "Oath of the Peach Garden," a symbol of fraternal loyalty, in which Liu Bei, Guan Yu and Zhang Fei became sworn brothers. Mr. Ikeda expressed his hopes that the students and faculty of the two universities would commit to their own "Oath of the Peach Garden," for it is through exchanges among youth that strong and lasting bonds of trust and peace can be built.

Founded in 1921, Hebei University today enrolls over 60,000 students in 25 faculties. It was one of the first universities designated by China's Education Ministry to receive overseas students.

[Adapted from an article in the April 17, 2008, issue of the Seikyo Shimbun, Soka Gakkai, Japan]