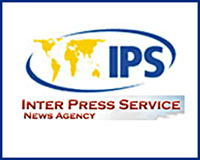 Inter Press Service (IPS), a news agency that specializes in development and human rights issues, recently interviewed Daisaku Ikeda, SGI president, on nuclear disarmament and the need to revive and re-energize efforts to achieve this goal. In the interview, Mr. Ikeda calls for a return to the original spirit of the Nuclear Non-Proliferation Treaty (NPT) and the creation of an Arctic nuclear-weapons-free-zone.

Based in Rome, IPS is "a communication channel that privileges the voices and the concerns of the poorest and creates a climate of understanding, accountability and participation around development, promoting a new international information order between the South and the North." Founded in 1964, it is now a leading news agency with a global network spanning 150 countries.

IPS enjoys General NGO consultative status with the United Nations' Economic and Social Council (ECOSOC) and is recognized as an ODA-eligible international organization by the Development Assistance Committee of the OECD.

UNITED NATIONS, Aug 1 (IPS) - As citizens of Hiroshima and Nagasaki are painfully reminded of the horrors of atomic bombings that devastated the two Japanese cities in August 1945, one of the country's most influential peace organisations is intensifying its longstanding efforts for nuclear disarmament.

"In order to revive and re-energise efforts for nuclear disarmament, we need to challenge the persistent notion that nuclear weapons are a 'necessary evil'," says Dr. Daisaku Ikeda, president of Soka Gakkai International (SGI), a Tokyo-based non-governmental organisation (NGO) with over 12 million members in some 192 countries.

"We need to remind people that, even when these weapons are not actually used, they exact an enormous cost in the form of monetary, technological and human resources consumed to develop, deploy and maintain them," said Ikeda, who is also a Buddhist philosopher, author and peace proponent.

The city of Hiroshima was bombed by the United States on Aug. 6, 1945, followed by the bombing of the city of Nagasaki three days later.

As the city commemorates the harrowing event next week, Mayor Tadatoshi Akiba says Hiroshima is currently one of the key campaigners, along with Mayors for Peace, for a 2020 vision on nuclear disarmament: a proposal to end nuclear weapons by the year 2020.

In an interview with IPS U.N. Bureau Chief Thalif Deen, SGI's Dr. Ikeda said that in the 63 years since the end of World War II, the citizens of Hiroshima and Nagasaki, the people who directly experienced the horrors of atomic war, have continued to raise their voices and speak out to remind the world of the dire threat posed by nuclear weapons.

IPS: How supportive is the Japanese government of this campaign? And how confident are you that this campaign will make any significant impact on nuclear disarmament when all others have failed?

DI: In terms of impediments to nuclear disarmament, the lack of political will among the nuclear weapons states is of course critical. But at the same time, I feel strongly that a lack of interest, a weakened sense of urgency among the world's people, is also a key factor. I believe the Vision 2020 Campaign is a direct outgrowth of the powerful, irrepressible sense of responsibility that survivors of the atomic bombings feel toward future generations. Many members of the Soka Gakkai in these two cities have dedicated themselves to conveying the horrific cruelty of these weapons to the future through publications and other activities.

The Hokkaido Toyako G8 Summit (of the world's eight most industrialised nations) held in July issued a declaration that included clear and specific references to the need for nuclear disarmament. This was the first statement of its kind from this body (which includes the United States, Britain, France, Germany, Italy, Canada, Russia and Japan). As host country, Japan has a particular mission and responsibility to lead the way toward nuclear disarmament.

In order to revive and re-energise efforts for nuclear disarmament, we need to challenge the persistent notion that nuclear weapons are a "necessary evil." We need to remind people that, even when these weapons are not actually used, they exact an enormous cost in the form of monetary, technological and human resources consumed to develop, deploy and maintain them. We need to revive a commonsense awareness of the folly of this choice. To this end, it is crucial that ordinary people continue to speak out through such vehicles as the Vision 2020 Campaign.

IPS: What is your reaction to sceptics who say that nuclear disarmament is an unreachable goal -- considering also the fact that the world meekly accepted three more nuclear powers, India, Pakistan and Israel, in the last three decades?

DI: The temptation to give in to hopelessness is certainly there. But we can't afford to do so, because the current situation is untenable. If we stop to think about it, it is clear that possessing nuclear weapons only intensifies mutual mistrust and suspicion. They heighten tensions and actually increase the threats to national security in interstate relations.

At the same time, it is impossible to imagine terrorist groups being deterred by nuclear weapons. For these reasons, relying on nuclear deterrence to achieve security objectives in today's world is a dubious proposition at best. We need to approach this issue from the perspective of what might be called a new realism.

Think of the states that were either developing, or already possessed, nuclear weapons but gave them up because they decided that possessing such weapons was not in their national security interests. South Africa, Brazil, Argentina, Ukraine, Kazakhstan, Belarus and Libya all chose this path. Supported by the enhancement of regional security arrangements, they saw that they could achieve their security goals without depending on nuclear weapons.

As the 1996 Canberra Commission wrote, "The only complete defence is the elimination of nuclear weapons and the assurance that they will never be produced again." We need to make sure that all the fissile materials that can be used to build nuclear weapons are strictly managed under reliable conditions. Such actions will advance not only national security, but human security. Nuclear abolition is actually the most realistic choice we can make.

IPS: Do you think the five declared nuclear powers -- the United States, Britain, France, China and Russia -- have a moral or legitimate right to call for the abolition of nuclear weapons when they refuse to dismantle their own weapons?

DI: I have long asserted that the primary responsibility for nuclear disarmament and abolition lies with the five states recognised as nuclear weapons states under the Nuclear Non-Proliferation Treaty (NPT). This is why I have continued to call for reviving the currently stalled disarmament negotiations between the U.S. and Russia. And this is why I have urged that this be linked to a coordinated effort by all five countries to develop an international framework with a binding timetable for achieving nuclear disarmament.

The NPT review conference to be held in 2010 represents an important opportunity. There needs to be a return to the original spirit of the NPT -- to avert the danger of nuclear war and to safeguard the security of peoples. The conference needs to find ways of promoting both non-proliferation and disarmament, to help countries free themselves from their reliance on nuclear weapons.

In recent years, key figures in nuclear weapons states, including former U.S. Secretaries of State Henry Kissinger and George Schultz, have called for the elimination of nuclear weapons. I think it is clear that the countries that possess the greatest stocks of nuclear weapons need to take the lead in realising a bold policy shift. This is the key to breaking the current impasse.

I would like to bring attention to the efforts of the Canada Pugwash Group to create a nuclear-weapons-free-zone in the Arctic. Realising such a zone would require a new level of proactive commitment from the U.S. and Russia and as such it could provide important new impetus toward the goal of nuclear abolition.

IPS: In September 1981, Israel carried out a unilateral attack on a suspected nuclear facility in Iraq, and in September last year, Israel launched a similar attack on a suspected plant in Syria. Did Israel have the legal or moral authority to conduct such unilateral attacks despite violations of national sovereignty and despite the fact that it is also a nuclear- armed country?

DI: The people of every country have the right to live in peace and security. And every country should pursue that goal through peaceful means. The use of the hard power of military force never produces real stability. This is not something that is limited to the Middle East, but is true everywhere. Force only inscribes new cycles of hatred and resentment, creating a negative legacy that will continue to haunt all parties.

The sparks of conflict cannot be extinguished with more fire. You need water. Rather than fan the flames of hate, we need to unleash a flood of dialogue. That is the best way to put out the flames. The fundamental solution lies in realising regional stability and, finally, creating a nuclear weapons-free Middle East. These are goals that can only be realised through dialogue. (END/2008)