The Russian Federation recently announced that it will present Daisaku Ikeda, SGI president, with its Order of Friendship. Instituted in March 1994 by presidential decree, the order is conferred upon Russian citizens and foreign nationals deemed to have contributed to strengthening friendship and cooperation between the Russian Federation and other countries in areas of science, culture, economics and peace. A January 9, 2008 presidential order signed by Russian President Vladimir Putin states in part that the Order of Friendship shall be conferred upon Mr. Ikeda in recognition of his manifold contributions to the development of Russo-Japanese relations and to the flourishing of bilateral exchanges. 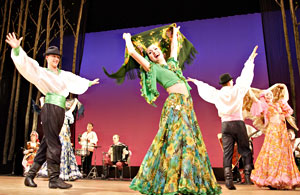 Since his first visit in 1974 during the Cold War, Mr. Ikeda has visited the former USSR and Russia six times to exchange views with Russian leaders and cultural figures. He has also promoted educational and cultural exchanges on a grassroots level through educational, academic and cultural institutions he has founded, including Soka University, the Institute of Oriental Philosophy, the Min-On Concert Association and the Tokyo Fuji Art Museum.

[Adapted from an article in the February 1, 2008, issue of the Seikyo Shimbun, Soka Gakkai, Japan]